StarWatch: Giants in the skies 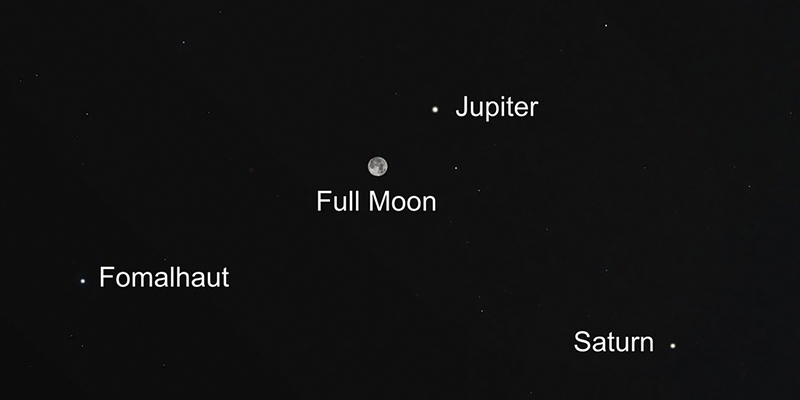 Jupiter and Saturn are at their best of the year this month, thanks to Earth lapping them in the race around the sun.

When Earth laps a planet, the event is called opposition because Earth passes directly between the planet and the sun, making the planet appear opposite the sun in the sky. Therefore, a planet at opposition rises around sunset and sets around sunrise.

Saturn is at opposition on the 2nd, Jupiter on the 19th. On those dates, the respective planets will be up all night. They will also be near their maximum brightness for the year, although the difference will hardly be noticeable, given how far out Jupiter, and especially Saturn, orbit. The planets’ average distances from the sun are 484 million miles for Jupiter and 886 million miles for Saturn.

Traveling the night sky below and slightly east of the planets is Fomalhaut, dubbed “the loneliest star” for its status as the only bright star in its patch of sky. Its constellation—Piscis Austrinus, the southern fish—ranks among the dimmest.

Venus still hovers close to the horizon after sunset, coming out slightly farther south from night to night. And in the morning sky, the familiar winter constellations rise earlier every day en route to their annual comeback.

The Perseid meteor shower is expected to peak the night of the 11th-12th, but the nights on either side of it may be just as good. The best time is usually after midnight. With no moon to interfere, this is a favorable year for the shower.

August’s full moon arrives shortly after moonset the morning of the 22nd. As it nears the western horizon, the plump setting moon will shine against a pale predawn sky. This one qualifies as a blue moon according to one definition: the third of four full moons in a season. Why the third, rather than the fourth, was designated special is complicated, but what’s not to love about a summer with four full moons?