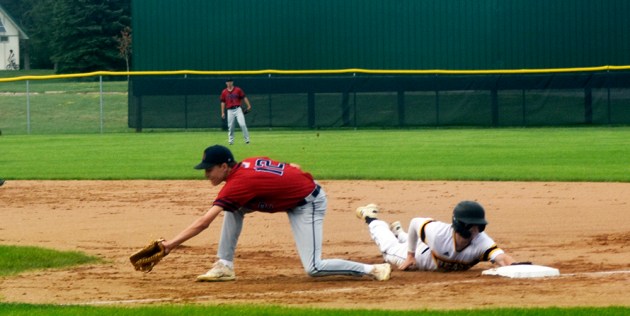 Austin’s Jordan Ransom hauls in a throw at first base. Rocky Hulne/sports@austindailyherald.com

The top of the order was on fire for the Austin Post 91 Legion baseball team as it beat Byron 14-4 in six innings in Marcusen Park Thursday, but the team still wants to get better.

Byron led 4-0 before Austin (9-2 overall) found its swing in the bottom of the second inning, where Nelsen drove in two runs to tie the game at 4 and Teyghan Hovland added an RBI to give Post 91 a 5-4 lead.

Nelsen said Post 91 needs to do a better job of coming out focused early in games.

“It’s not expected to come back, but we know we can come back from anything,” Nelsen said. “We need to pick it up and start having energy in the first three innings. Most of these teams aren’t in the same ballpark as us. We can’t give up leads and we can’t give up innings. We’ve got to win the whole game and not just the last four innings.”

Nelsen launched a two-out, RBI single to put Austin up 8-4 in the bottom of the third and Copley followed that up with a two-run single of his own to make it 10-4.

Austin finished with 11 hits as a team and nine of them came from the top five hitters in the lineup.

“We started out flat. Right when they started getting hits, everyone was getting hits,” Copley said. “Our top hitters start it and everyone finishes it.”