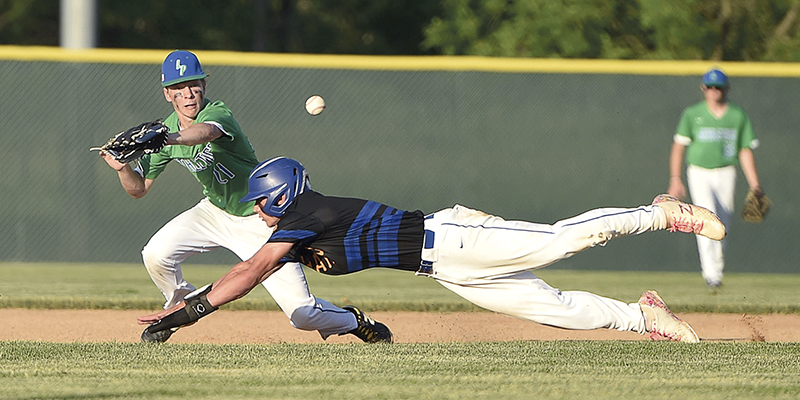 Lyle-Pacelli’s Jayden Lewis leans for the ball across a diving Easton Fritcher on a play at second in the Section 1A championship. Herald File Photo

Whether he’s playing basketball, baseball or simply watching a game, Easton Fritcher does everything full speed. He’ll eventually be taking that attitude to the University of Minnesota after recently making his verbal commitment to play baseball for the Gophers.

Fritcher helped the Vikings win their first ever state championships in basketball and baseball in 2021, playing a vital role on both teams. Fritcher grabbed an incredible 29 rebounds in Hayfield’s state semifinal basketball win over Legacy Christian, and went on to make a few highlight catches, while slugging his fair share of home runs and pitching the Hayfield baseball team to a state title in the spring.

Fritcher’s athleticism and energy also showed when he was scouting out Lyle-Pacelli in a game this spring as he climbed the fence to chase down foul balls multiple times with the exuberance of a young kid.

Fritcher’s energy and skill have not only made him the first Division I baseball commit in Hayfield history, it’s made him a fan favorite and a team leader.

“They all know Easton is the best player out here and he’s still working his tail off,” Hayfield head coach Kasey  Krekling said. “The other kids see that and it rubs off on them. He never takes a play off in basketball or baseball and it definitely shows.”

Fritcher, who will be a senior this fall, said he drew multiple Division I offers, but his heart was in Minnesota. The Gopher baseball team went 6-31 overall last season. Fritcher will likely be used as a hitter and an outfielder. If he can add about 10 miles per hour to his 87 mile per hour fast ball, he may get the chance to pitch.

The college commitment was a perfect way to top off an incredible year for Fritcher.

“It’s been a roller coaster and I’ve been riding it,” Fritcher said. “Those two state championships gave me the confidence to make my commitment to the Gophers. I’m going to keep smiling. Coming off of COVID-19, it was a pretty darn good year.”

Hayfield’s Easton Fritcher launches a fly ball that ended up being just a couple feet foul of a home run in the Minnesota Class A semifinals in St. Cloud. Herald File Photo

Fritcher has been putting in work on the diamond in the metro area since he was seven years old when he began playing for the Minnesota Blizzard with his Hayfield teammates Joey Tempel and Isaiah Tempel. He immediately fit in at a high level and was playing varsity baseball for the Vikings by the time he was a seventh grader. He’ll now be using his senior year to prepare for playing Division I baseball.

“The U of M was just a great fit for me, being a Minnesota guy,” Fritcher said. “I really like how they’re all about family. It reminds of the playing with the Blizzard.”

Krekling is among many of those in Hayfield who sees Fritcher having a bright future in the baseball diamond.

“He’s a guy that shows hard work and dedication can pay off, even for a small town kid. He’s put in a lot of time since elementary school,” Krekling said. “He plays year round. He has a God given athletic ability, but he’s done a lot with it to grow and get better. He works a lot with our younger guys and he knows what he’s talking about. He’s like another coach.”

Fritcher won’t be able to officially sign with Minnesota until November.