Grove, Hegge and Herzog named Pillars of the City 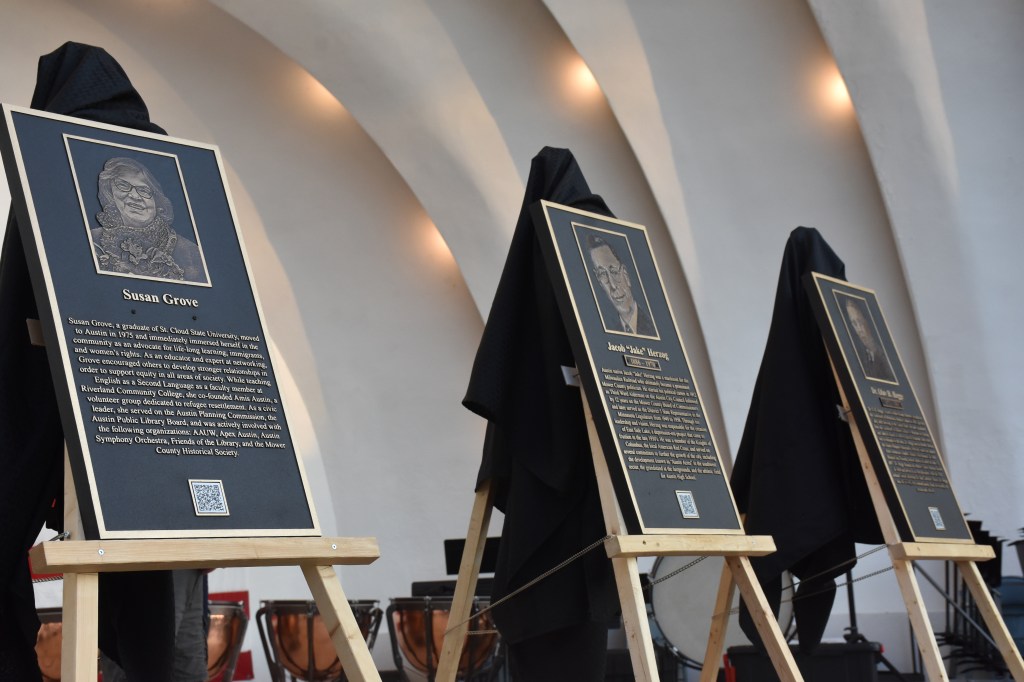 Plaques for the 2021 Pillars of the City were revealed on Sunday during FreedomFest at Bandshell Park. Photo by Michael Stoll/mike.stoll@austindailyherald.com.

Established in 2015, the Pillars of the City Committee gives recognition to people in Austin’s past and present who have made significant contributions to improving the quality of life in Austin related to growth, economic impact, health, education, culture, recreation, communications, business or scientific innovation.

This year’s selections were Susan Grove, Dr. Olav H. Hegge, and Jacob “Jake” Herzog. A plaque was unveiled for each during the ceremony; the plaques will be placed on permanent display on the flood wall pillars on North Main Street.

“It’s just an honor; I am really humbled,” said Grove, who was the only living recipient from this year. “Anybody who says there is nothing to do in Austin needs to call me. Austin is a really good place for opportunities.”

Several members of Grove’s family were present during the ceremony. Relatives of Hegge and Herzog were also present.

The plaque unveilings have been held at Bandshell Park during FreedomFest every year since 2016 with the exception of 2020, which was held at the North Main Street floodwall due to FreedomFest being cancelled because of the COVID-19 pandemic.

Grove, Hegge and Herzog join 17 other individuals named as Pillars of the City. A complete list and biographical information can be found at http://www.ci.austin.mn.us/boards-commissions/dedicated-pillars.

Susan Grove, a graduate of St. Cloud State University, moved to Austin in 1975 and immediately immersed herself in the community as an advocate for life-long learning, immigrants, and women’s rights. As an educator, Grove is an expert at networking and encouraging people to develop stronger relationships with others in order to support equity in all areas of society. While teaching English as a Second Language as a faculty member at Riverland Community College, she co-founded Amis Austin, a volunteer group dedicated to refugee resettlement. She served 10 years on the Austin Planning Commission. As a civic leader, she is actively involved with the following organizations: AAUW, Apex Austin, Austin Symphony Orchestra, Friends of the Library, and the Mower County Historical Society.

Dr. Olav H. Hegge, a native of Biri Parish, Norway, enrolled at the University of Minnesota Medical School in 1890, just two days after arriving in the United States. He later graduated from the University of Illinois School of Medicine in Chicago and came to Austin in 1894 to practice medicine. Since there was no hospital in the area, Hegge and his brother formed the Austin Hospital Association. With his vision and support from community leaders, Austin’s first hospital, St. Olav Hospital and Training School, opened its doors on June 13, 1897. Hegge founded the Mower County Medical Society in 1904 and served as its first president. After the 1928 tornado, which destroyed St. Olaf Lutheran Church, he was the driving force behind raising funds for building the present-day church.

Austin native Jacob “Jake” Herzog was a machinist for the Milwaukee Railroad who ultimately became a prominent Mower County politician. He started his political career in 1912 as a Third Ward Alderman on the Austin City Council, followed by 12 years on the Mower County Board of Commissioners. He later served as the District 5 State Representative in the Minnesota Legislature from 1949 to 1958. Through his leadership and vision, Herzog was responsible for the creation of East Side Lake, a depression-era project that came to fruition in the late 1930s. He was a member of the Knights of Columbus, the local American Red Cross, and served on several committees to further the growth of the city, including the development known as “Austin Acres” in the southwest sector, the grandstand at the fairgrounds, and the athletic field for Austin High School.