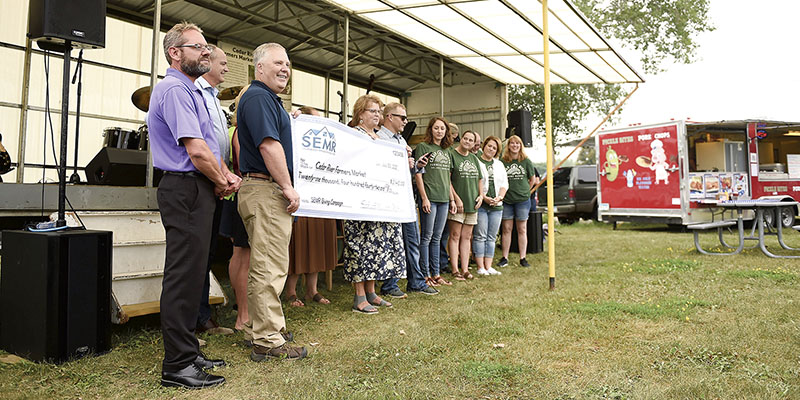 A check from the Southeast Minnesota Realtors Association for over $12,000 was presented to the Cedar River Farmers Market Friday afternoon. Eric Johnson/photodesk@austindailyherald.com

Early Friday evening, the Cedar River Farmers Market was the beneficiary of a donation from the Southeast Minnesota Realtors Association for over $21,000.

The donation of $21,442 to Impact Austin, the organization behind the market, is the total sum that includes matching funds, will go to assist in the groundwork for the permanent location at 501 Oakland Avenue East.

“SEMR has a long tradition of giving back to the communities we work and live in,” said Jacob Smith, a realtor for eXp Realty. “Austin is a fantastic place to build a business, build a home and build a life.”

The market is one of five campaigns by SEMR across southeast Minnesota, which is giving a grand total of $112,000 to organizations in Rochester, Albert Lea, Owatonna and Winona.

Impact Austin looks to develop the area, next to the old Terp Ballroom, into a location that would include stalls for vendors and performance space for music.

A donation of this kind  is a big step forward for Impact Austin and the CRFM. It’s a show of confidence.

“They were pretty instrumental in fueling other grants for us,” said Impact Austin Coordinator Mary Anne Duren. “It shows community support. This shows community backing.”

From te beginning when it was announced in October, the market was announced as a reimagining  of the Austin Farmers Market and was officially opened this past June.

While the entire process will be completed in phases, a donation of this size gives a feeling of accomplishment for the community.

“When an idea comes to fruition and people come together for a common goal … good things come,” said City Administrator Craig Clark.