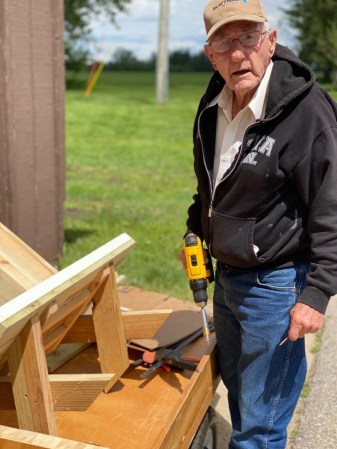 Eugene “Gene” Charles Corcoran, age 89 of Austin MN, passed away on Saturday, July 10, 2021, at Legacy of Brownsdale, surrounded by his loved ones. He was born December 11, 1931, in rural Mower County to John and Mildred (Boe) Corcoran.

An Irish quote reads: “May you be at the gates of heaven an hour before the devil knows you’re dead!”

Gene grew up in southern MN, starting off in Grand Meadow, Taopi, Dexter, Redwood Falls, MN along with his five siblings, whom he adored and loved to tell the tales of days-gone-by. In his earlier days, he was a self-taught carpenter and drove the mail route and became a “jack of many trades”.

In 1955, he married Elizabeth L. (Miller) Corcoran from LeRoy, MN and together they had seven children, later divorcing. He was always a hardworking man that believed in the value of work, he made his living and supported his family doing construction work. He was always remodeling one house only to buy another house for his young family. He followed I-90 road construction out to Wyoming and lived out west for several years. He later retired in the Austin area. Gene lived his life honestly, honorably and his way. He never let the grass grow beneath his feet… “A man who dares to waste one hour of time has not discovered the value of life.” —Charles Darwin

A memorial service will be held at 2:00 p.m. on Wednesday, July 14, 2021, at Worlein Funeral Home Chapel in Austin, MN. Visitation will take place one hour prior to the service. In “Irish” fashion a toast will be held immediately following the service. He will be laid to rest at a later date next to his grandparents at Saint Finbarrs Cemetery, Grand Meadow, MN. Worlein Funeral Home of Austin is assisting the family with arrangements. Condolences may be expressed to the family online at www.worlein.com.