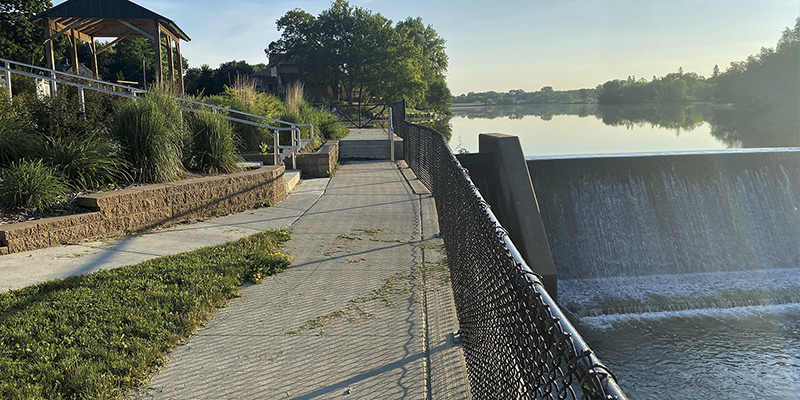 The point overlooking the dam at East Side Lake has been named in honor of Jacob Herzog. Photo provided

Jacob Herzog became inspired in 1910 after reading a newspaper article that put a $1 million value on a city having a lake.

That night, Herzog discussed the idea of Austin getting a lake – worth $28 million in today’s dollars – with a local barber who fished and swam in the former Beaver Lake on Austin’s east side. The old lake was the backwaters of a dam on Dobbins Creek that operated a flour mill near today’s East Side Lake dam until a June 1892 flood destroyed it.

The duo decided to push for rebuilding the Dobbins dam but soon gave up after being met with opposition. Five years later, Herzog – who lived near the former dam on Herzog Street (13th Street Northeast) – pushed again while on the Austin City Council. He asked the city to buy the old dam’s property.

Despite many opponents, the city bought the property, starting a nearly 25-year effort led by Herzog that eventually created East Side Lake after a fall rainstorm in 1939 finally filled the larger, deeper lake bed. It was the first time in 47 years that Austin’s east side had a lake.

Now, a public area overlooking the East Side Lake dam recently has been officially named “Herzog View” in honor of the Austinite who championed the idea of the lake for several decades. This month, the Austin Parks & Recreation Board approved “Herzog View” for the previously unnamed overlook redeveloped by the City of Austin a few years ago when Mower County replaced the adjacent Oakland Place bridge.

A small pavilion, landscaping, decorative railings and a long sidewalk with fencing above the dam for anglers and others are featured at the overlook on the dam’s north side.

With the name official, the Park & Rec and the Cedar River Watershed District will create signage with “Herzog View ” and historical information on it for the overlook. CRWD was awarded an Austin Area Foundation grant for the signage.

Earlier this year, CRWD outreach coordinator Tim Ruzek, who has researched and written about East Side Lake, asked the Park & Rec board to name the overlook area after Herzog, who died in 1970 at age 83. The board agreed but wanted more time to consider different names for the public space.

“Jacob Herzog played a major role in how much of Austin looks today along our waterways and parks,” Ruzek said. “He never gave up on his dream for a lake and worked tirelessly for that project and the overall betterment of the community.”

Part of Herzog’s history with East Side Lake also involved rescuing a 15-year-old boy from drowning in May 1947.

Herzog was also honored July 4 at Austin’s Freedom Fest as one of three new Pillars of the City.

Perseverance pays off for lake

A machinist for the Milwaukee Railroad in Austin for most of his career, Herzog entered politics in 1912 by joining the Austin City Council. In 1922, he began 12 years of service as a commissioner on the Mower County Board and later served from 1949 to 1958 as a state legislator in the Minnesota House.

During the 1930s and 1940s, Herzog worked about 10 years in administering federal work programs but returned to the Milwaukee Railroad after World War II.

In 1961, the Austin Daily Herald wrote a feature article on Herzog and the lake’s history, stating that he was “more than any other man responsible for building” East Side Lake.

For years, Herzog thought the new lake would never happen. During that time, the former Beaver Lake area was a muddy marsh considered by the public to be an eyesore, with a large hole where there once was a mill dam.

After convincing the city to buy the former dam’s site in 1915, the project to create another dam and lake stalled until the early 1930s. At that time, Herzog was serving on the county board when the federal Civil Works Administration (CWA) approved building a dam on Dobbins, which began in August 1934.

CWA labor built the dam but the federal Works Progress Administration (WPA) – directed by Herzog, who served as WPA’s regional manpower director – did most of the work to create the lake bottom and shorelines. Material removed for the lake bed was used to fill muddy or marshy areas at Austin’s Driesner and Sutton parks along Dobbins. It also helped create today’s Bandshell Community Park near Skinners Hill.

“The operations gave the city three parks, usable land and a lake bottom,” the Herald wrote in 1961.

During the 1930s, some called the future lake “Herzog’s mud hole” as work slowly progressed. At one point, 140,000 cubic yards of dirt had been removed from the lake bed but the completed dam remained open for the creek’s normal flow due to litigation threats of an upstream property owner.

In 1938, another 60,000 cubic yards of dirt were removed from the lake bed under a negotiated deal led by Herzog with the state’s transportation department to build a new highway closer to the future lake that, in turn, would help the highway construction with material and appease the protesting property owner.

This became Austin’s new, eastside entrance in August 1938, and today is the four-lane Oakland Place Northeast along the east side of East Side Lake.

Water still was lacking in 1938, however, for the future lake, and skeptics kept hounding Herzog about his so-called “mudhole.” The dam was fully closed but Dobbins still wasn’t providing enough water behind it.

On Nov. 5, 1939, heavy rain fell near Brownsdale (the upper part of Dobbins) that filled the lake overnight.

Austin’s Izaak Walton League chapter immediately stocked thousands of mature fish in East Side Lake and got the city council to forbid fishing there until 1941.

Today, East Side Lake remains a popular place for outdoor recreation in Austin, featuring a fishing pier, picnic shelters, playground and boat access as well as a “Tree Trek” by the nonprofit Spruce Up Austin that boasts 75 different species of trees on the lake’s eastern side.