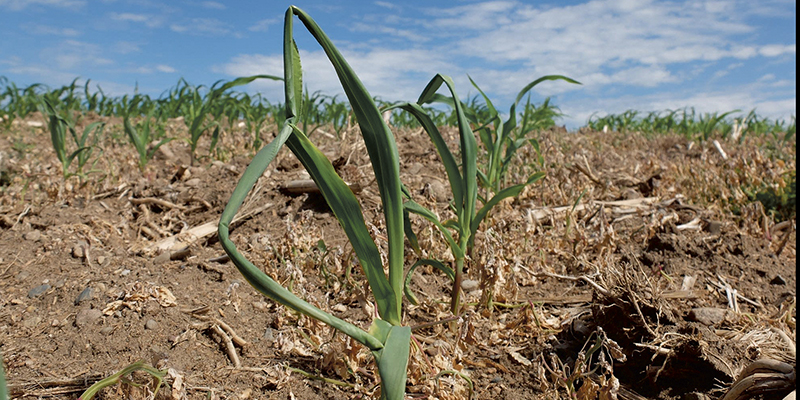 Lucky or not might be the best way to describe crop conditions across Minnesota.

Bryan Biegler raises corn and soybeans near Lake Wilson in the southwestern part of the state. It’s dry there, but crops look surprisingly healthy, said Biegler, because the area has been getting just enough rain to keep crops green and growing.

“It reminds me a lot of 2012, when we had a drought around the area, and we just kept catching little rains here and there, just that tenth or two,” said Biegler.

“Hopefully, that keeps going this year, but it’s been just enough to keep everything looking nice.”

His corn is at a critical stage and he worries this week’s dry, hot weather will make the corn “go backwards” reducing harvest potential.

“If the corn got all it wanted right now, it’s using one-third of an inch a day,” Vipond said. “To take it to harvest and have a decent harvest, we need at least three to four inches of rain.”

Vipond irrigates one field out of a stream, but he expects to shut down the irrigation pump soon because the stream is nearly dry.

And that’s common across northern Minnesota.

“Six of ten river gages in the Rainy River basin are showing record low levels for this time of year,” said Fallon.

To the east of the Rainy River basin, the Superior basin also has some streams at record low levels for July, and most northern rivers are unusually low for July.

“If you looked at the flow we have right now, that would be typical of what we’d see in a relatively low flow year — in late September or early October,” said Fallon.

The only areas of the state with normal river flows are southwest and southeast Minnesota.

The Mississippi River is also at very low levels compared to the historic record.

“The oldest continuously operated gage in the state is the Mississippi River at Grand Rapids,” said Fallon. “It has a 136-year record, and the flow there is below the 10th percentile of flow, so we only see this flow about 10 percent of the time.”

“One of the first things we start to implement is the even-odd sprinkling restrictions. That’s something that we still anticipate that we’ll be entering into fairly shortly,” Pfister said.

Pfister recommends conserving water by taking shorter showers and turning off the faucet when you aren’t using water, such as when you brush your teeth. He also recommends a broom instead of spraying to clear pavement and rethinking the next car wash.

“Some of the little things that if everybody starts doing them together, they make a little bit more of an impact,” said Pfister.

Evans said a brown lawn “isn’t dead,” and that “It’s not dying. You’re not going to have to replace it. It’s simply going into a state of dormancy.”

That brown lawn will recover when rain falls again.

If you choose to water your lawn, Evans said it’s important to water early in the morning to avoid much of the water evaporating in the midday heat. He often sees people apply too much water. Lawns need one inch a week.

A simple test is to set a couple of coffee mugs on the lawn while the sprinkler runs.

“If you go outside and after 30 minutes that coffee mug is full, that kind of gives you an indication of, OK, maybe I only need to run my sprinkler system for 10 or 15 minutes,” said Evans.

For those who have replaced part of their lawn with pollinator-friendly native plants or a vegetable garden, Evans encourages checking the water needs for various plants.

There’s no widespread drought relief in sight this week.

Hot, dry conditions show no sign of letting up…