An Austin man who allegedly sexually assaulted a 15-year-old girl made his first appearance on Thursday in Mower County District Court.

According to the criminal complaint, a woman told Austin police on June 28 that her 15-year-old daughter disclosed that she had been sexually assaulted after she had observed bruises on the girl’s neck. She said the victim reported the assailant was named “Kevin Ronan Price,” later identified as Morgan-Price.

The victim indicated she had known Morgan-Price for about four years and that she had sporadic text and telephone contact with him over the past year. She made in-person contact with him in Pine Island on June 14 and he asked her to go to Rochester with him. They eventually went from Rochester to Austin.

The victim said they went to the Kwik Trip on Fourth Street Northwest and purchased a phone charger. She indicated Morgan-Price took her phone after she charged it and put it in his pocket. They continued to walk around and Morgan-Price took a brown recliner from the side of a street. She said they then went to a wooded area and smoked marijuana. 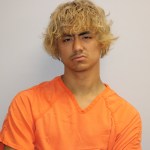 The victim indicated the marijuana tasted different and she believed it contained another drug. She said she fell asleep on the recliner, but when she woke up, Morgan-Price was having sex with her. She said she told him to stop, but he told her several times to “be quiet” and indicated he got physically violent. She said she was afraid to yell because she thought he would harm her.

The victim said when Morgan-Price went toward the river afterwards, she was able to get her phone and run away. She hid until about 11 a.m., when she called a friend and was told to call 911. She was picked up by an officer, but did not disclose the sexual assault. She told her mother, who then took her to the hospital for a sexual assault examination.

Morgan-Price will appear in court again on July 15.