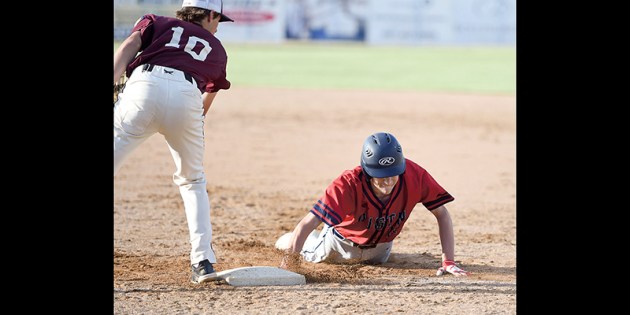 Austin’s Jordan Ransom dives back into first base on pick-off attempt against the Rochester Redhawks Monday night at Marcusen Park. Eric Johnson/photodesk@austindailyherald.com 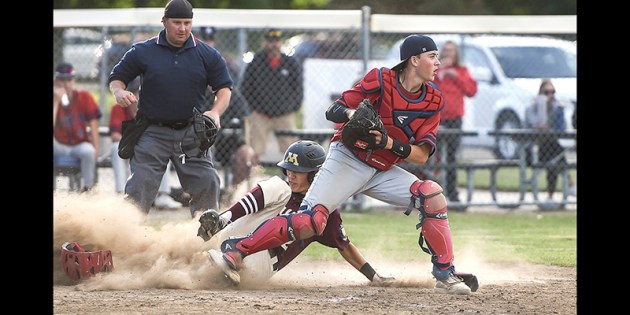 Austin’s Cole Walter looks to third base after getting the force out at home against the Rochester Redhawks Monday night at Marcusen Park. Eric Johnson/photodesk@austindailyherald.com 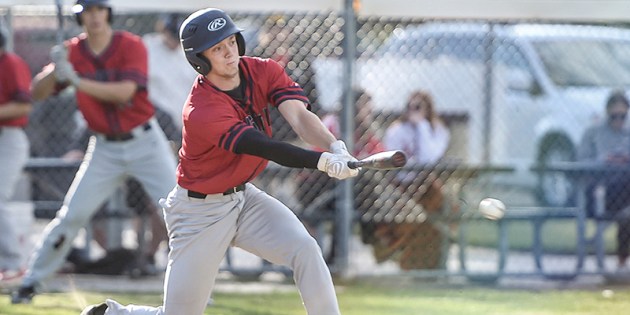 Austin’s Dusty Copley reaches out for a single against the Rochester Redhawks Monday night at Marcusen Park. Eric Johnson/photodesk@austindailyherald.com 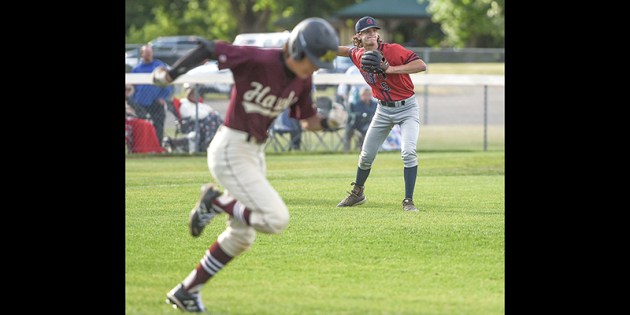 Austin’s Anthony Ciola turns to throw to first base against the Rochester Redhawks Monday night at Marcusen Park. Eric Johnson/photodesk@austindailyherald.com

In a game that they trailed by as many as four runs, Austin won it in the seventh after Dusty Copley beat out an infield single, advanced to second on a Lathan Wilson walk and scored the game winning run on a throwing error by Rochester on a bunt by Jordan Ransom.

Copley, who is from Grand Meadow, went three-for-five with a double and an RBI at the plate.

“I had the confidence at the plate and when I got on base, I knew I had to use my speed to score for my team,” Copley said. “It’s my first time playing Legion and I think it’s the most fun I’ve ever had playing baseball. It brings everyone together and it’s really fun to play.”

Mayo had the bases loaded with one out in the top of the seventh inning, but Sam Nelsen made a running grab in left field and Cole Walter recorded a strikeout to escape the frame.

Walter struck out six in two and two-thirds of an inning to score the win in relief.

“I knew if I kept throwing strikes that my teammates would make plays behind me,” Walter said. “That ended up happening.”

The Redhawks tied the game at 7-7 on a hit batter with the bases loaded in the sixth inning and Nolan Thompson singled in a pair of runs with a shot to right field to make it 9-7.

Mayo led 6-2 going into the bottom of the fifth inning when the Post 91 bats woke up. Bray Klapperick gave Austin a pinch-hit RBI single to put it up 7-6 after Zach Bollingberg doubled in a run, Dusty Copley doubled in two runs and Jed Nelson had a sacrifice fly.

Post 91 pulled within 3-2 in the bottom of the third inning when Cole Walter doubled in a run and Nelsen singled in a run.

Mayo took a 3-0 lead in the top of the second when Liam Dahl connected on a two-run double with two outs.

Austin (2-2 overall) piled on 11 hits in the win as seven players collected at least one hit.

“It’s nice having nine hitters who are comfortable any time that they step in the box,” Walter said. “It’s always fun to get together with other competitors. We’re playing baseball with a lot of our good friends for life.”