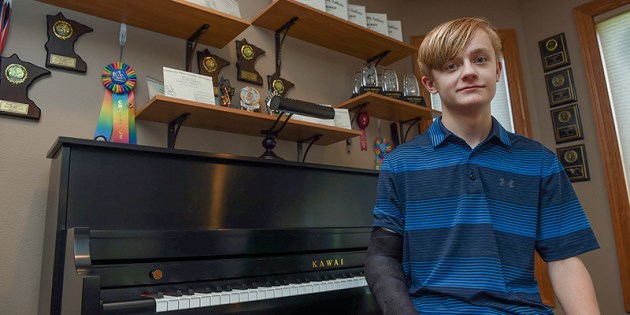 Blake Zimmerli sits at the family’s piano with his awards in the background. Photos by Eric Johnson/photodesk@austindailyherald.com 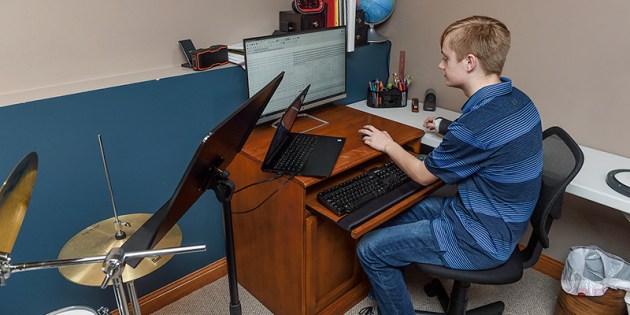 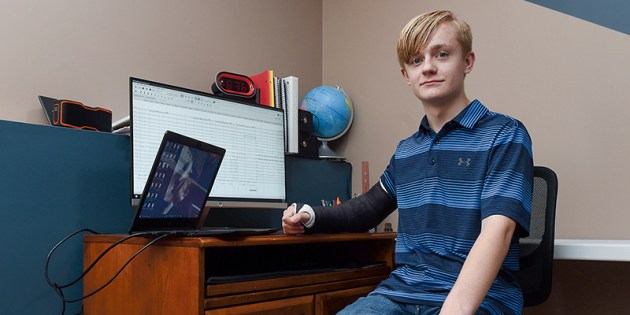 The COVID-19 pandemic didn’t slow Blake Zimmerli down as he surrounded himself with his music. Eric Johnson/photodesk@austindailyherald.com 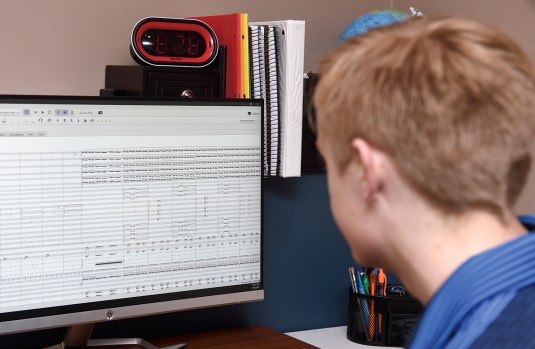 Blake Zimmerli has thrown himself into music, working on symphonies

Fifteen-year-old Blake Zimmerli was no different than any other kid when COVID-19 hit. As things started locking down, Zimmerli started looking for things to occupy his time — so he started writing symphonies.

Blake has been infatuated with music for years now, indulging in notes, chords and movements at every chance he can get and he’s reaping the rewards of that love, winning competitions on the state level and garnering support from local music instructors here in Austin.

“It’s just kind of cool to see all the hard work and it’s nice to see other people recognize it too,” Blake said.

Music is everywhere in the Zimmerli basement. A piano, crowned with Blake’s awards on a shelf over the piano, occupies a corner of the basement, while in a room off the basement sits a computer where Blake composes, surrounded by a pair of xylophones and a drum kit.

All of this started at a young age with a simple question — could he take piano lessons?

It’s been his passion, not ours,” said Stephanie Zimmerli, Blake’s mom. “In kindergarten he started asking about piano.”

But Blake’s parents hesitated at first, wanting to make sure Blake was old enough to understand the commitment; however, they quickly began to see that Blake’s love of music was genuine.

“We didn’t want him to hate something at five and not understand the commitment and passion,” Stephanie said.

Not long after, another interest started developing in Blake — percussion, though Blake concedes that there wasn’t anything specific that drew his attention to either piano or percussion while admitting at the same time just how different they were.

“They’re very different,” Blake said. “I just did  it because I wanted to do it. I tried it and liked it and stuck with it.”

Blake embarked on piano lessons and for the first two years only placed in the local Harris Music Contest, hosted by the Hormel Historic Home. However, in this third year things changed and Blake found himself winning on the state level.

As Blake continued, he started finding an interest in composing, something he and his family saw as a logical next step.

“He always had to write his own piano song once a year starting in second grade,” Stephanie said. “Then he went to a class so he could learn software that would help.”

Blake started composing songs on his piano and then expanded to percussion instruments. It didn’t take long to expand further.

All of this work transitioned to time spent learning at the MacPhail Center for Music, which in the fall of 2020 opened its brand new center in Austin, as well as various music teachers in the Austin Public Schools District.

There, Blake indulged in learning instrument after instrument and worked with any teacher he could. It wasn’t necessarily to be able to play the instrument, but to at least understand the instrument so he could work it into his symphonies.

However, when COVID-19 took a complete hold on society, things changed. Blake’s music went to Zoom, but the learning didn’t stop.

“It took a lot of adapting because everything turned virtual,” he said. “After a while I got the hang of it. Music never really stops.”

Lessons continued, but with all of that time Blake began working more on his symphonies and very quickly it occupied a lot of this time, taking up to 6-8 hours a day on the weekend alone.

His desk would be plastered with notes from talking with teachers and he jumped feet first into using music-writing software. The result is he’s currently working on his eighth symphony.

Blake’s style for his symphonies is upbeat and fast, tending to shy away from your typical classical arrangements.

“There’s not a dull moment in my music,” Blake said.

Instead, Blake tends to trend toward scores you might hear in a movie soundtrack when something exciting is happening. Blake is hoping he will be able to have his symphonies played some day, but even if they are not, he’s still enjoying the process.

“You think of it and see the whole thing and when it’s done and not even being played … it’s still fun,” Blake said.

And at this point, Blake isn’t even sure he wants to continue writing as a profession.

What he is sure about is enjoying the challenge music presents as well as hearing feedback from professionals. When Blake takes part in contests, he’s not necessarily there to win it all — though he does enjoy it. Oftentimes, it’s the feedback he craves.

“I just want to be critiqued,” he said. “I want to try something totally out there.”

As long as he continues to show that passion, Stephanie said that the family is willing to support Blake.

“I think it’s great,” Stephanie said. “All sorts of kids have their own talents. His dad and I want him to be happy and successful.”

For Blake, it comes down to pure enjoyment the music brings him.

“I just really like it,” he said. “It’s a great outlet, a whole different world. You’re doing your own thing and it makes me feel good. It makes me feel happy.”