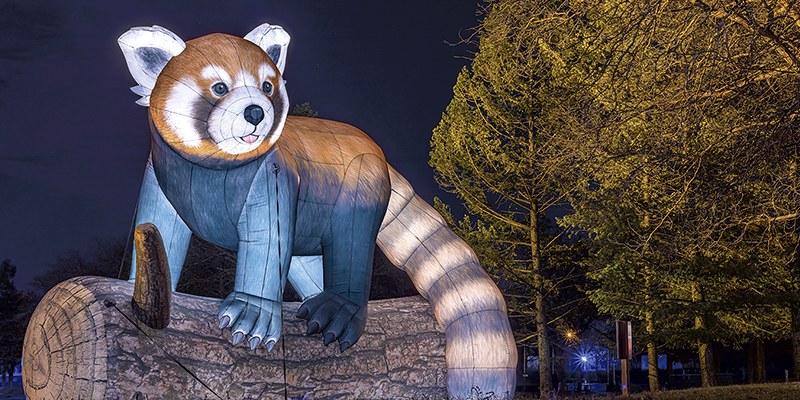 A 25-foot-tall Red Panda will be on display at the Austin ArtWorks Festival. Photo provided

Two of the Minnesota Zoo’s acclaimed Nature Illuminated animal sculptures will leave the zoo grounds for the first time to be exhibited at the Austin ArtWorks Festival this year.

A 25-foot-tall Red Panda and the 10-foot-tall Dakota Skipper will travel to the 10th annual Austin ArtWorks Festival, held Aug. 28-29. Each sculpture was crafted by artists at Landmark Creations in Burnsville, whose custom work has been featured at the MTV Video Music Awards, Coachella, and the GRAMMY Awards.

“Folks on our leadership team visited the Nature Illuminated tour in December and were immediately inspired,” said Laura Helle in a press release. “We wanted to bring these incredible, unique sculptures to Austin and we are grateful that the Minnesota Zoo chose Austin for the first out-state exhibit.”

In 2020, the Minnesota Zoo commissioned thirty-one large scale inflatable sculptures of at-risk and endangered animals. The animal art was on display at the zoo for a drive-thru experience in November and December 2020.

Thousands of visitors are expected to attend the Austin ArtWorks Festival in the heart of downtown Austin over the two-day celebration of visual, literary, and performing arts.

The two Nature Illuminated sculptures will be enjoyed alongside live music, presentations by authors, fine art exhibitors, and family art-making opportunities. The event is free to attend.

Look to Saturday’s Herald for a more in depth look at the new addition.