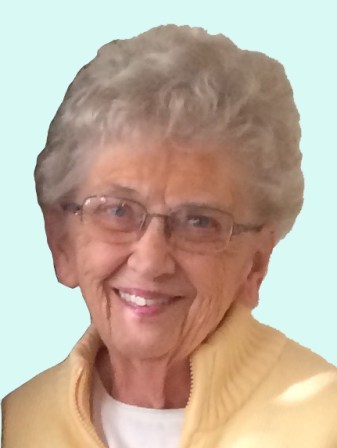 She left us the way she had spent all of her life. Quietly and without fuss, never calling attention to herself or wanting extra attention.

Lila was the first to offer a helping hand to family and friends and the last to admit that she couldn’t handle any job that needed to be done. She learned how to be independent early on as a young child. She lost both her parents, then was separated from her older sister and younger brother when they were all sent to live in separate households. As a dutiful wife and loving mother, her job was to keep boisterous children quiet so that her husband, who worked the night shift, could sleep during the day.

She was born Lila Tiller on July 14, 1928, in a house in Wanamingo, Minnesota. Her father, Richard, was a drayman who once had a team of six white horses helping him make deliveries. The Great Depression ended his business. Lila’s mother, Esther, was in and out of the sanatorium until she passed away when Lila was eight years old. It was decided that Richard could not raise three children on his own, so Lila was sent to live on the farm with her godparents, Selma and Alfred Morkre. Lila’s older sister, Ruth, and their baby brother, Richard II, were sent to live with their mother’s mother, Grandma Haugen. The children saw each other at church and occasional family gatherings.

Lila suffered from hay fever her entire life. Growing up on the farm meant that she was subject to the whims of mother nature in the spring, summer, and fall. She attended a one-room schoolhouse. Perhaps she was inspired to be a fifth-grade schoolteacher because one of her aunts taught Lila’s second-grade class.

Being able to drive was important to everyone living in the country, especially a teenaged girl. The only requirement for driving a car was to go to the courthouse and pay for a 50¢ license. And that is just what Lila did. She was 14-years-old.

She graduated from Kenyon High School in 1946 and received an elementary teachers certificate from Mankato State in 1948. She taught school in Dodge Center, Minnesota. When she left teaching to get married, her students gave her a cast iron griddle as a parting gift. A very much loved and well-used kitchen treasure. She made pancakes with that griddle with regularity. I’m sure that is one memory many of us who were treated to breakfast at her red Formica kitchen table will always hold dear. Watching her getting the batter to the exact consistency in that Tupperware bowl and pouring the batter onto that hot griddle to create those thin, tasty delicacies.

Lila met her husband, Charles “Chuck” Knippel, while she was teaching school in Dodge Center. They were married on August 30, 1950, in the minister’s front parlor. The story goes that the minister’s wife had made pickles that morning, so the house smelled like vinegar. But it didn’t sour Lila and Chuck on beginning a new life together in Austin and going on to raise their children (Ross, Craig, and Sue) in the same house for over 25 years.

Chuck worked as an Engineer for George A. Hormel & Co. and was very enthusiastic about fishing, hunting, and gardening.

To help alleviate Lila’s hay fever, every fall, the family would pack up and go to Lake of the Woods for an extended fishing trip. Lila was famous for her expertise at preparing the Walleye the rest of the family caught.

An excellent cook, Lila could turn out the flakiest pie crust on her apple pies, wafer-thin sugar cookies, and made mouth-watering treats. One of her specialties was lefse which was appreciated both at home and as part of her church women’s group Scandinavian Days. Lila’s doughnuts were also a special favorite. She was especially very proud of her Norwegian heritage.

She was a doting grandma and spent as much time with them as she could. One story of a shopping trip to the local K-Mart with her first grandchild even made the Austin Daily Herald. While trying on sandals, her granddaughter propped her teddy bear up on the shelf. Later that day, after the store closed for the evening and it was time for bed, the little girl realized her bed partner was missing. Lila reported a fretful night for the household. In the morning, they were waiting before the store opened to retrieve the missing stuffed animal, who was patiently waiting where the little girl had left him. The newspaper heard about the teddy bear’s adventure. Sharing day-to-day life, the column captured the concern Grandma displayed for her granddaughter’s worry that the bear would be scared to spend the night alone without her.

When her daughter, Sue, gave birth to twin granddaughters, Lila went to California to help out with the new babies and their 1-year-old big brother. The California household tripled in size overnight. Grandma Lila adored being able to lavish love on “her kids.”

Lila reveled in taking care of all her children, grandchildren, and extended family. She loved to cook and fuss over them. Always making an effort to bake someone’s favorite pie, making sure there were cookies in the house (especially for those who didn’t like pie), or a fresh pan of bars to offer her company. Christmas wasn’t complete without an assortment of cookies, candies, and popcorn balls to tempt our sweet tooth.

She never had an unkind word to say about anyone. Throughout her troubles, she was patient and gracious. Her faith was vital to her, and she was a member of St. Olaf Church for 70 years, where she taught Sunday School, was active in Circle, Helping Hands.

A private family internment will be held at Trinity Cemetery, Wanamingo, MN. Services are prearranged and performed by Clasen-Jordan Funeral Home of Austin. Condolences may be expressed to the family online at www.clasenjordan.com.