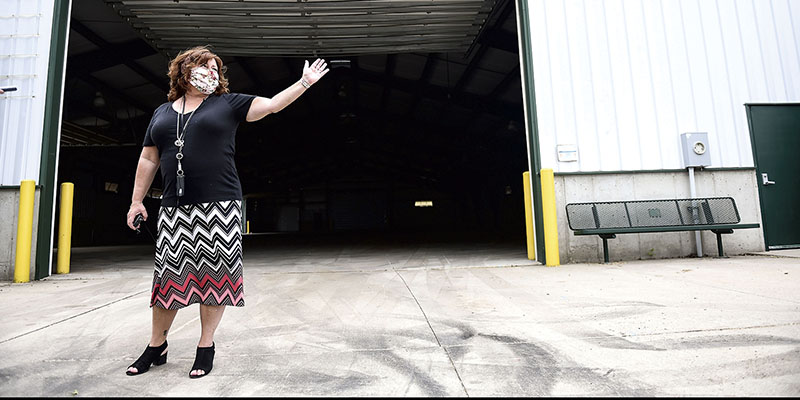 Pam Kellogg points out how testing will run during a tour at the Mower County Fairgrounds last June. Herald file photo

As reports of new and active COVID-19 cases continue to remain relatively low in the area, life in Mower County is gradually returning to normal. This is further helped by the wider availability of vaccines.

“I predict we will continue to see it slow over the summer,” said Community Health Division Manager Pam Kellogg, who has been among those tracking active cases since the pandemic began. That cautious optimism replaces the feeling of uncertainty that came about when the first case of COVID-19 was reported in Mower County on March 18, 2020.

Prior to the arrival of coronavirus in the state, health officials had to prepare to track active cases if they had any hope of trying to contain the spread. Early on, the County established the Emergency Operation Center, which included members of Mower County Emergency Management and Public Health, as well as Mayo Clinic, law enforcement, fire, the county administrator and a county commissioner. Kellogg said the County initially relied on regional epidemiologists for active case reports.

“Our southeast regional epidemiologist would notify us of any local cases,” she said. “Our county also worked very closely with Mayo Clinic’s infection control nurses.”

But as the pandemic worsened, more sources were made available to keep track of the rising numbers.

Kellogg said that not having a robust reporting system in place proved to be a challenge for keeping track of cases at the beginning of the pandemic. This improved overtime, as did the turnaround time for getting test results. Even so, some cases still likely went unreported.

“I’ve heard of quite a few cases that were not reported because the person did not get tested,” Kellogg said. “One person in the family tested positive so the rest of the family just assumed they were positive too.”

Kellogg said there were times when the numbers reached a critical level in Mower County.

“We experienced two waves,” she said. “The first was in late May, early June. The second wave occurred in November and was by far the largest.”

Though numbers have been low lately, Kellogg said she doesn’t know what to expect come fall. But to help continue keeping numbers low, Kellogg has one piece of advice: “Get your vaccine.”