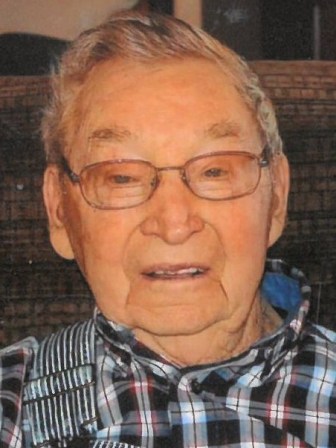 Gaylord Harding Tapp, age 99, of Brownsdale, Minnesota, passed away on Tuesday, June 8, 2021, at the Good Samaritan Society in Albert Lea, Minnesota. He was born October 28, 1921, in Alden, Minnesota, the son of Harvey and Myrtle (Smith) Tapp. At the young age of 5, Gaylord’s mother died, and he was raised by his stepmother, Julia (Kruse) Tapp. He attended Dist. 37 Tanner School.

Gaylord was drafted and served in the U.S. Army with the Company A 50th Combat Engineers from September 1942 – September 1945. They were trained to build roads, airstrips, bridges, towers, and barracks. Gaylord took part in five “D Day” invasions during his time in the service, Attu, Kiska, Marshall Islands, Island of Leyte, and Okinawa. Gaylord was discharged as a CpT-5. He was awarded 4 Bronze Stars, The Philippine Presidential Citation, Asiatic-Pacific Theater Medal, WWII Victory Medal, Good Conduct Medal, and the Purple Heart with Oak Cluster for being wounded twice.

He was united in marriage to Erene Sorensen on October 24, 1948, at Our Savior Lutheran Church in Brownsdale, Minnesota. The couple made their home on the family farm, where they were blessed with three children. In addition to farming, Gaylord raised dairy cows, hogs, and chickens. He also worked at Wilsons in Albert Lea, Minnesota, for 9 years and owned and operated Gayrene Café in Waltham, Minnesota for 11 years. During his working years he also drove bus for the Brownsdale Roller Rink, drove lime truck, and did custom farm work such as baling. After retirement, he volunteered with many organizations in Brownsdale and in Austin. Gaylord was a member of Our Savior Lutheran Church in Brownsdale. He loved to dance, especially the Polka and Waltz. Gaylord was a great conversationalist and enjoyed visiting with everyone. He will be dearly missed by all who knew and loved him.

A funeral service will be held at 11:00 a.m. on Monday, June 14, 2021, at Our Savior Lutheran Church in Brownsdale, Minnesota. Visitation will take place from 4:00-6:00 p.m. on Sunday, June 13, at Worlein Funeral Home in Austin, and will continue for one hour prior to the service at the church on Monday. Interment will be in Greenwood Cemetery, Brownsdale. Services are prearranged and performed by Worlein Funeral Home of Austin. Condolences may be expressed to the family online at www.worlein.com.