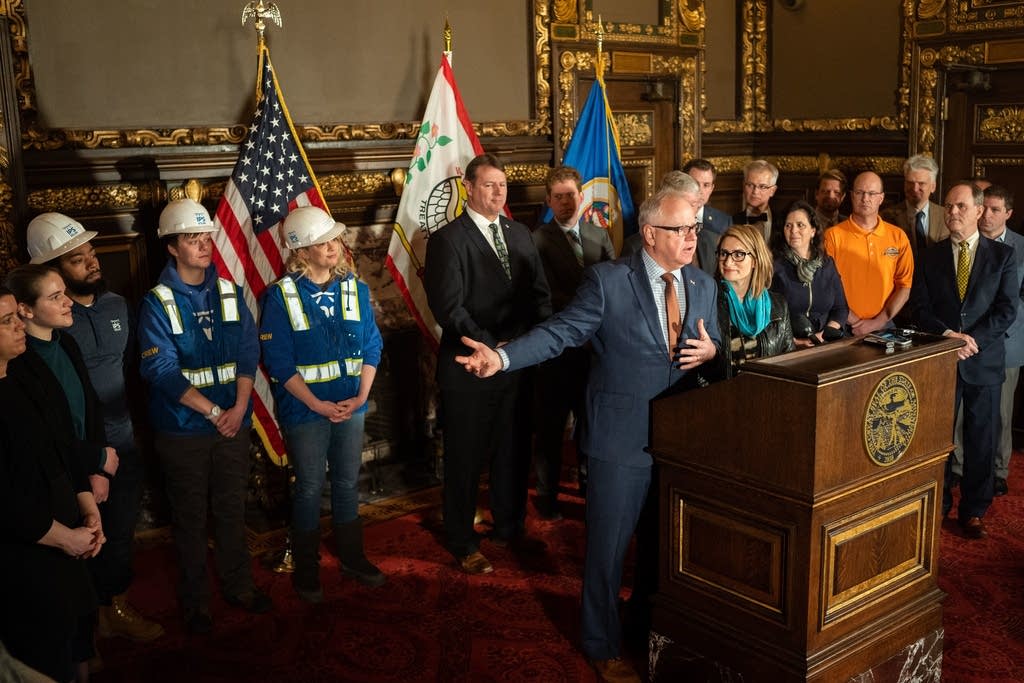 Gov. Tim Walz gestures to renewable energy workers during a press conference announcing a plan to make Minnesota's electric energy carbon-free by 2050 inside the Minnesota State Capitol on March 4, 2019. Walz's rules for vehicle emissions standards are among the sticking points in the Legislature reaching a deal on a new state budget.Evan Frost | MPR News 2019

Next week Minnesota lawmakers will meet in a special session to try to agree on a new state budget and avoid a government shutdown on July 1. Democrats and Republicans disagree on a lot of provisions in budget bills, and one key sticking point has been new vehicle emissions standards that Gov. Tim Walz’s administration is working to impose.

Negotiations on the environment and natural resources finance bill have been hung up for weeks. Senate Republicans oppose the clean cars initiative for new vehicles that House Democrats and Walz support.

The governor and the Minnesota Pollution Control Agency (MPCA) have been working on adopting the standards through the administrative rule-making process to reduce greenhouse gasses and other air pollution. An administrative law judge held hearings earlier this year and recently approved the rules, which would be the same as standards already in place in California.

Gazelka said he does not think Minnesota should be following California’s lead and he disagrees with a requirement that automakers deliver more hybrid and electric vehicles for sale in Minnesota.

“We don’t want our local dealers to have 7 percent of their stock of cars electric when people only buy about 1 percent,” Gazelka said. “We think it’s coming. We think electric cars are coming. We think infrastructure should be thought about. But that is something we’re still trying to see if there’s a solution there.”

“That’s our compromise,” said Gazelka. “We think it’s really important to delay that.”

The MPCA says the emissions standard will apply to new cars, SUVs and pickup trucks. It will not apply to farming equipment, off-road vehicles, heavy-duty vehicles or used vehicles.

The standoff is putting at risk the larger environment finance bill. That means money for environmental agencies and programs, including state parks.

“We are going to implement those emission rules,” Walz said last week, adding that threats to block the bigger funding bill are irresponsible. The issue is off the table, Walz said, noting that consumers will still have choices on what type of new vehicle they buy. He said he sees no reason to delay the standards.

“It doesn’t go into effect until 2025. We’ve already waited another six months to try to accommodate them,” Walz said. “Fifteen states have already gone in this direction. I’m usually not a bettor, but mark my word, most states will be there in the next 10 years. The only thing this does is put Minnesota at a disadvantage in the marketplace.”

The key negotiators on the environment bill language are Sen. Bill Ingebrigtsen, R-Alexandria, and Rep. Rick Hansen, DFL-South St. Paul. Neither are talking publicly about the status of the talks.

When it comes to environmental issues, there are big partisan divides that are hard to bridge, said DFL House Speaker Melissa Hortman, but she remains optimistic that an agreement will be reached.

“In a policy area where there are big differences of opinion, usually changing from the status quo is not likely to be successful.”