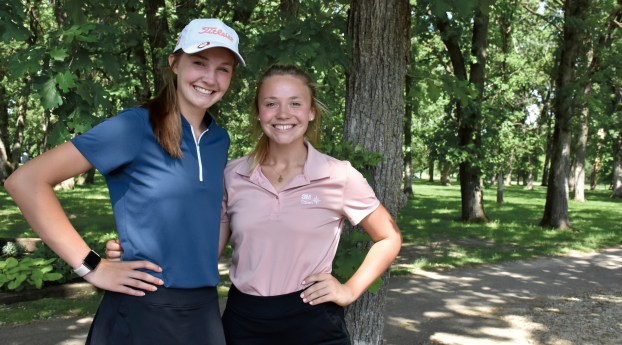 From left, Blooming Prairie’s Jessica Ressler and Halle Strunk are all set to compete in the Minnesota Class A State Meet next week. Not pictured is BP state qualfiier Maggie Bruns. Rocky Hulne/sports@austindailyherald.com

BP seniors will go out in style at state golf meet

BLOOMING PRAIRIE — Two years ago, Blooming Prairie senior Halle Strunk was the only golfer for the Awesome Blossoms girls team.

Now, after the 2020 season was cancelled due to the pandemic, she’s one of three Awesome Blossoms who will be competing at the Minnesota Class A State Golf Meet at Pebble Creek Golf Club June 15-16.

Joining Strunk at state will be fellow seniors Maggie Bruns, a first-year golfer who used to play softball and Jessica Ressler, who started golfing in middle school, but took two years away from golf before this season.

“It was a lot more fun playing this year. Going into it by yourself, you knew you couldn’t win anything as a team. We won the conference this year as a team and it was really exciting,” Strunk said. “We put a lot of work in before and after practice.”

Ressler returned to golf when she felt she was missing out on the action during her sophomore year.

“A lot of my siblings golfed and when they would come home from a meet, I would wish I was there,” Ressler said. “It was tempting.”

All three golfers have put in a lot of time this year, but they’ve also approached the sport without feeling any pressure.

“These girls have all worked hard,” BP head coach Carl Peterson said. “Jessica would get up at 6 a.m. on the golf simulator and Halle worked all summer on her game.”