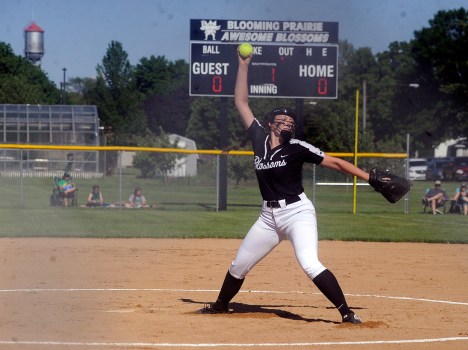 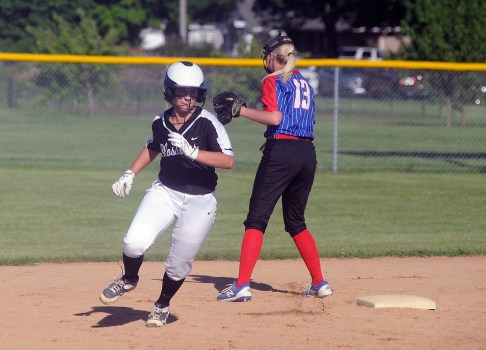 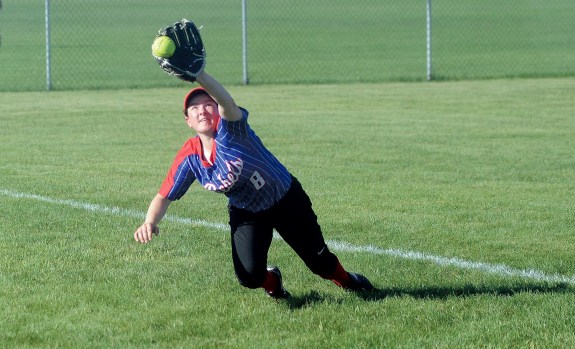 Southland’s Kayla Nelsen lays out for a catch against Blooming Prairie in a Section 1A Tournament opener in BP Tuesday. Herald File Photo 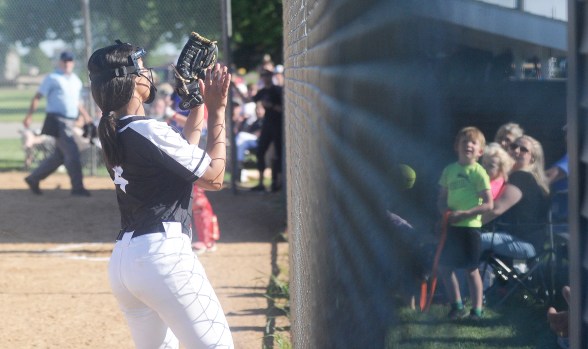 Blooming Prairie’s Shawntee Snyder watches a ball float over the fence on the third base side of the field in BP Tuesday. Rocky Hulne/sports@austindailyherald.com 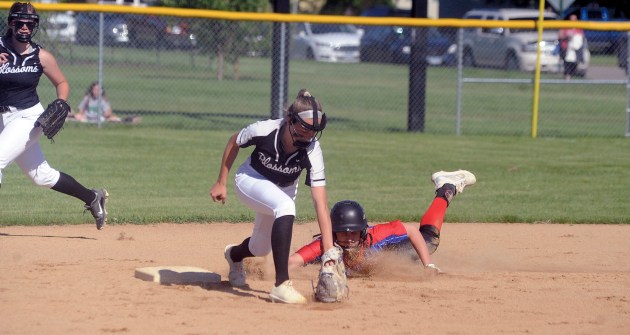 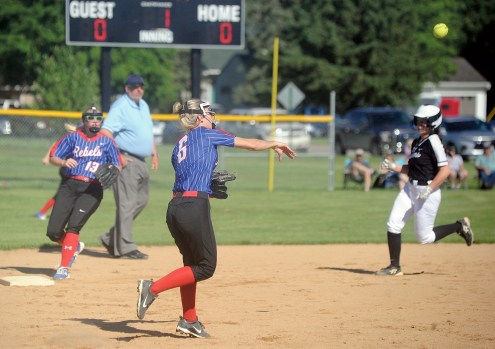 BLOOMING PRAIRIE — The Blooming Prairie softball team took advantage of every opportunity it had, while taking away any momentum the Rebels could garner as the No. 4 seeded Awesome Blossoms knocked No. 5 Southland out of the Section 1A West Tournament with an 8-3 victory in BP Tuesday.

BP took advantage of a two-out Southland error in the bottom of the first inning when junior Lexi Schammel drove in two runs with a big double to left field.

“The coaches just told us to be confident,” Schammel said. “I just went up there confident and it paid off.”

Kelsey Mensink doubled in a run to bring the Rebels (7-12 overall) within 2-1 in the top of the second, but BP (8-12 overall) scored four times in the bottom of the fourth with the help of two hit batters, a walk and an error.

Despite trailing 7-3, the Rebels had a chance to get back into the game when Hattie Wiste drilled her second triple of the day to right field to start the frame, but the would-be rally was stalled when Southland’s Olivia Matheis hit a scorching line drive right at BP shortstop Macy Lembke, who hauled it in and threw to third for a double play. Lembke was filling in for BP’s regular starting shortstop Bobbie Bruns, who is out with an injury.

BP senior catcher Maren Forystek said the double play took a big weight of the shoulders of the Blossoms.

“That was a big sigh of relief,” Forystek said. “I think we were ready for this one. We knew what was on the line. We had to play our best ball to move on and that’s what we did.”

“We couldn’t string hits together,” Southland head coach Greg Schulte said. “We would have a hard hit ball and it would go right at them for the third out. I think what really hurt us was the errors.”

The Rebels may be done playing this spring, but this season saw them make a big turnaround as the team had just four wins in the 2017-2018 and 2017-2018 seasons combined.

“The confidence was a lot higher for the girls this year,” Schulte said. “We just need to find the consistency in each game. Once we find that, we can compete in each game and be a contender in the Subsection.”

BP will now play at No. 1 Waterville-Elysian-Morristown at 5 p.m. Thursday. The Bucs beat BP by scores of 17-1 and 7-0 during the regular season.