Area athletes are geared up for state track meet 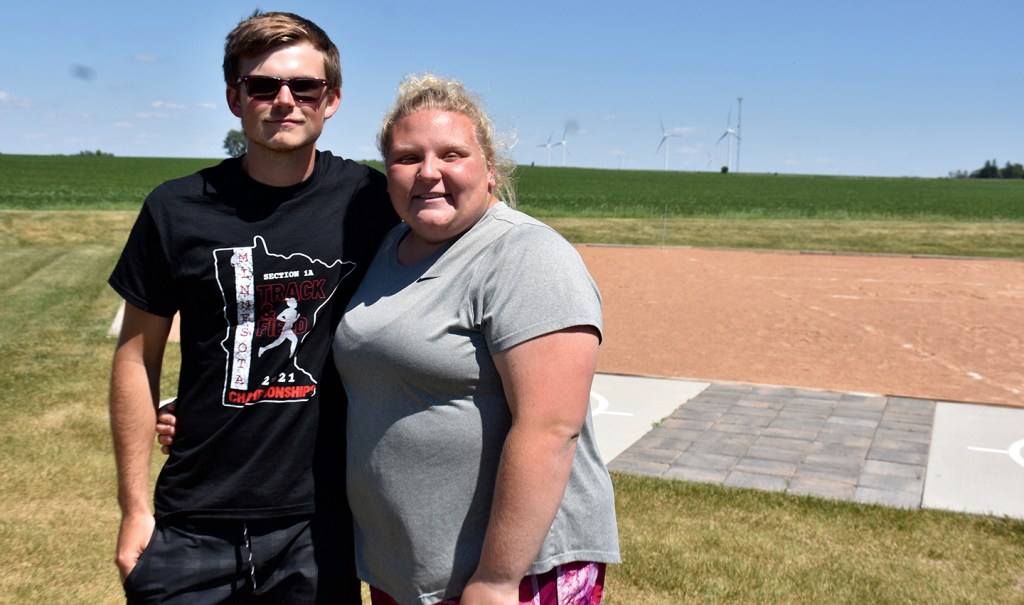 From left, Hayfield’s Steele Tebay and Madison Johnston will compete in the state track and field meet this week. Rocky Hulne/sports@austindailyherald.com

HAYFIELD — The Minnesota Class A State Track and Field Meet will be packed with area athletes this year with some vying for titles and some just soaking up the experience.

Area schools will compete in 14 total events at the Class A meet and the big contenders in the area include Grand Meadow/LeRoy-Ostranders/Kingsland/Southland junior Riley Paul in the shot put, senior Hailey Hindt in both hurdles races and sophomore Annika Reiland in both sprints.

The Minnesota Class A meet will be held at St. Michael/Albertville at 3:30 p.m. Friday. There will be no preliminary events and the meet will be one day.

For Hayfield’s Steele Tebay and Madison Johnston, the meet is a chance to see what it’s like to compete on the big stage for the first time.

Tebay is a long jumper who had to work all season to get to state and now he’s just six feet from breaking the Hayfield High School record that was set by Dan Proeschel in 1966.

“This time around, I’m just trying to get used to things. I’m not supposed to do anything major there. I would like to break that school record,” Tebay said. “I started out slower than I would’ve liked to this year. I had a few minor injuries and I saw kids who had beaten over the last couple of years being a foot or two ahead of me. That really pushed me to come along towards the end of the year.”

Hayfield senior Madison Johnston is seeded fourth in shot put as she aims to go out with a big throw. She started the season by adding about three feet to her previous best throw and she’s been able to stay consistent.

“I just showed up for the first meet and I threw a 39. I was like ‘woah.’ That was a big jump,” Johnston said. “I’ve worked on my form and getting faster and it’s worked pretty well.”

It’s been an exciting spring in Hayfield as the school is sending two golfers, two track and field athletes and the baseball team to state tournaments. The Vikings also won their first ever state basketball title this year.

“I’m kind of excited. I’m ready for my summer to start, and I’m happy that I got as far as I could get,” Johnston said. “We have a bright and happy community and the success has really brought the community together. I think it’s great for the underclassmen to see, because it will make them want to try and do it when they get older.”

110-meter hurdles: Blooming Prairie junior Xavier Rennie is seeded sixth out of 17 runners with a time of 15.84 seconds.

Long jump: Hayfield junior Steele Tebay is seeded 10th out of 16 jumpers with a distance of 20 feet, 7.25 inches.

Shot put: GMLOKS junior Riley Paul is seeded third out of 16 throwers with a distance of 51-10.50.

100-meter hurdles: GMLOKS senior Hailey Hindt is seeded third out of 17 runners with a time of 15.55 seconds.

100-meter dash: GMLOKS sophomore Annika Reiland is seeded second out of 17 runners with a time of 12.60 seconds.

300-meter hurdles: GMLOKS senior Hailey Hindt is seeded third out of 16 teams with a time of 45.80 seconds.

800-meter run: GMLOKS sophomore McKenna Hendrickson is seeded ninth out of 18 runners with a time of 2:23.65.

200-meter dash: GMLOKS sophomore Anika Reiland is seeded fourth out of 18 runners with a time of 25.79 seconds.

Shot put: Hayfield senior Madison Johnston is seeded fourth out of 16 throwers with a distance of 39 feet, 3.5 inches.