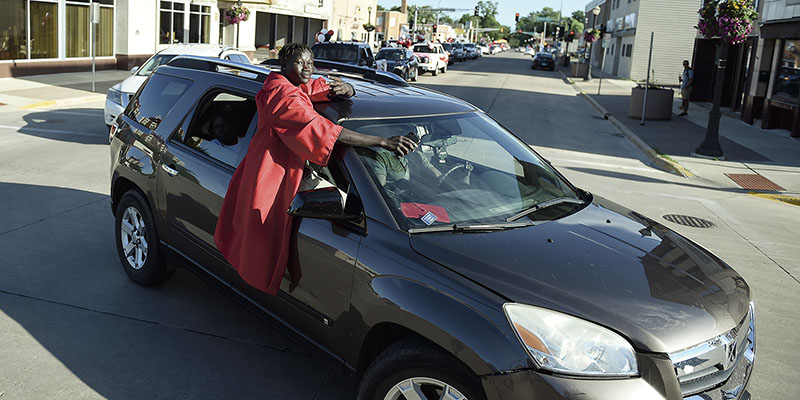 Anga Lual turns toward the school off Main Street with his family during Austin’s version of commencement last year. Despite a year broken up by COVID-19, Austin Public Schools saw an increased graduation rate in 2020. Herald file photo

The news is in line with that of the state, which saw nearly 84% of seniors in the Class of 2020 graduate in four years.

Meanwhile, Krenz told the board that APS saw 80.8% students graduate in 2020.

“It was another outstanding year for us,” Krenz said. “If you go back the last five years — in 2016 we were at about 71% in Austin Schools for our graduation rates.”

“We’ve been on a steady increase over the last five years and we’re really excited about that.”

What remains to be seen is the exact effect the COVID-19 pandemic will have on graduation rates. Schools are a year ahead of the numbers released so it’s very possible those rates will go down in next year’s report as the full impact of COVID-19 is felt.

In his final meeting as APS superintendent, Krenz used the opportunity to thank administration and the board for their support during his tenure with the school.

“As I call an end to my career, I want to thank each of you for your support,” Krenz said. “It’s been a tremendous school district in my career and I couldn’t even fathom finishing in another place.”

He also took the time to assure that the district is being left in good hands when Dr. Joey Page takes over as the incoming superintendent.

“Having worked with Joey over the last several months, I know he is committed and will do a marvelous job for this school district,” he said.

Krenz then received a standing ovation from those in attendance.

“It has been a good match,” said Board Chair Kathy Green to Krenz. “The kids have benefitted.”

‘Pinnacle season’ of the Cedar Summerstock Theater is on…