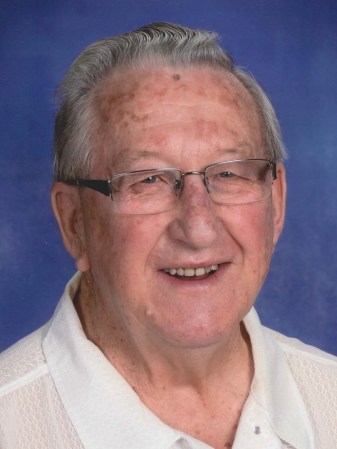 William “Willie” A. Friedrich, 91, of Austin, Minnesota, passed away Saturday, May 1, 2021 at Mayo Clinic Health Systems in Austin.

Willie was born March 25, 1930 in Moscow Township, Minnesota, one of ten children born to Wilhelm and Olga (Klingfus) Friedrich. He graduated from Austin High School with the Class of 1948 and went to work at George A. Hormel & Co. Six months into his employment, he entered the United States Navy, serving from 1949 to 1950. After his service, he returned to Austin and worked at Hormel for 39 years, retiring in 1987. Willie was united in marriage to Jean McKinney on May 26, 1951 at St. Olaf Lutheran Church.

He was a faithful member of Our Savior’s Lutheran Church where he was a money counter for 45 years. Willie loved sports and was a good athlete (he could do one-arm pushups into his 40s). He was a Minnesota State Wrestling Champion in 1948, and that year, the Austin High School team also won the State Championship. During his time in the service, he was the All-Navy Wrestling Champion in his weight class. Willie was enthusiastic about many sports and enjoyed bowling, golfing, and he played a lot of softball. For over 45 years, he was on the “Chain Gang” at the Austin High School football games. Willie also liked to hunt for deer and pheasant.

Willie met Rosemary Kuether in 1988 and she remained his close companion for over 30 years. They enjoyed traveling to Colorado to see family and loved going to family weddings together. Willie valued spending time with his family and friends and he was infamous for his “secret recipe junk food” which everyone loved!

He was preceded in death by his parents; wife, Jean in 1987; daughter, Ann Jacobsen in 2012; brothers, Gustav, John, Henry, Fred and Albert; and sisters, Ida Norman, Caroline Lewis, Laurie Watson and Edna Ludwig.

Funeral services will be held at 11:00 am on Thursday, May 6th at Clasen-Jordan Mortuary with the Reverend Mark Van House officiating. Visitation will be one hour prior to the service. Interment will be at Grandview Cemetery with Austin Post #91, American Legion and Olaf B. Damm Post #1216, VFW in charge of military rites.