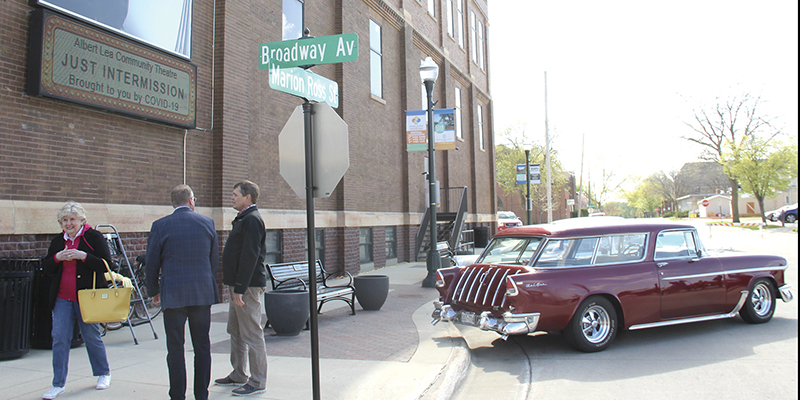 The street that runs next to the Marion Ross Performing Arts Center will now be known as Marion Ross Street.

Albert Lea Mayor Vern Rasmussen Jr. and Albert Lea Convention and Visitors Bureau Executive Director Holly Karsjens unveiled the new street sign Thursday during a short ceremony outside the theater. The name change applies to about a block of roadway starting at the intersection with Broadway. Further west, the street will continue to be known as Water Street.

The unveiling came as a group of residents has fundraised for a new statue of the “Happy Days” actress that is slated to be installed in July at the corner of Broadway and Marion Ross Street.

Glen Parsons, one of the members of the fundraising committee, said the statue is a thank you to Ross for the support she has shown to the community.

The statue will feature Ross as her character, Mrs. Cunningham, seated on a park bench with an outstretched hand inviting visitors to take a seat beside her for a photo op.

Ross grew up in Albert Lea and calls Albert Lea her hometown. Parson said she has done fundraising for the Freeborn County Historical Museum, and she has also taken the Albert Lea Community Theatre under her wing, which performs at the theater that bears her name.

He said he thinks the statue will be another attraction to the historic downtown.

Ross plans to attend the unveiling of the statue in Albert Lea on July 2 and has invited Henry Winkler, who played “The Fonz” on “Happy Days,” to attend.

Rasmussen read a proclamation declaring “Happy Days” in Albert Lea before the street sign was unveiled, and afterward, a fundraiser meal took place at the American Legion Post 56 across the street.