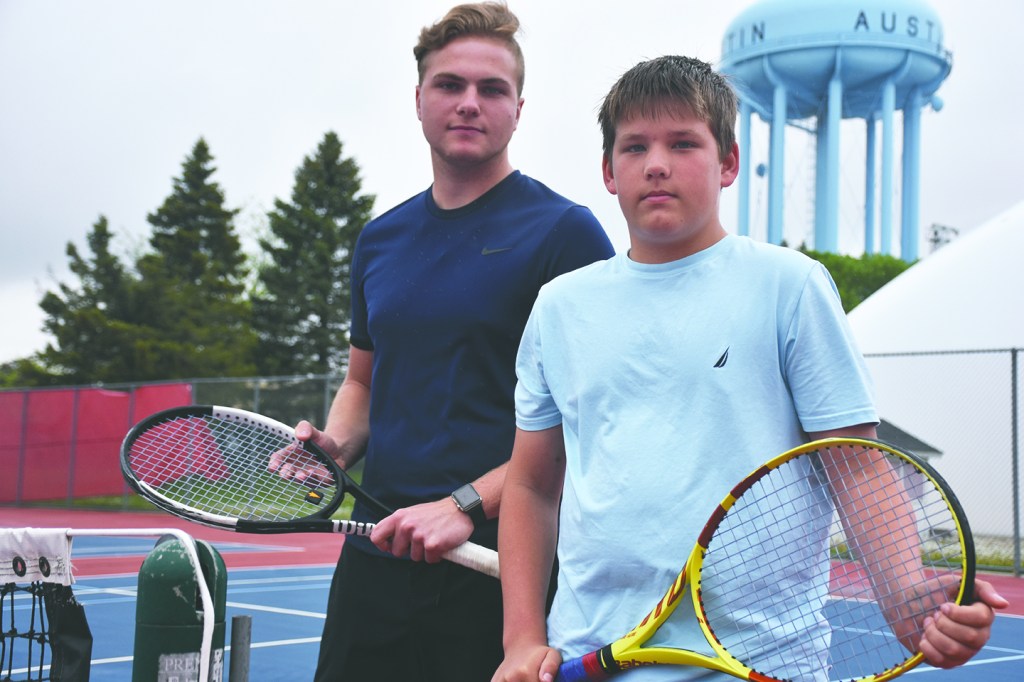 Austin tennis players Joey Schammel, left, and Cole Hebrink, right, have led the Packers this spring. Schammel, a junior, gives the team a veteran leader and Hebrink, a seventh grader, has developed as a confident player. Rocky Hulne/sports@austindailyherald.com

Austin junior Joey Schammel is enjoying his best season as a Packer, and he’s starting to rub off on the trash-talking seventh grader who is never short on confidence.

Schammel, who is the No. 1 singles player on the Austin tennis team, started to get to know Cole Hebrink, Austin’s No. 2 singles player, last summer and quickly realized that he was going to hear a lot of noise when he went up against the youngster. 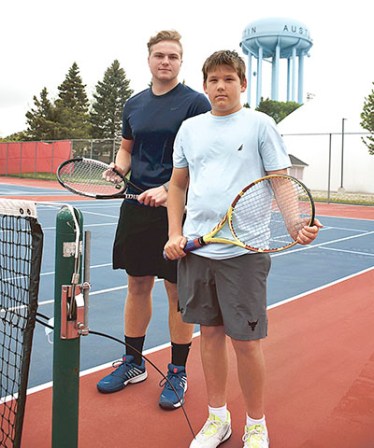 Austin tennis players Joey Schammel, left, and Cole Hebrink, right, have led the Packers this spring. Schammel, a junior, gives the team a veteran leader and Hebrink, a seventh grader, has developed as a confident player. Rocky Hulne/sports@austindailyherald.com

“I would always tell Joey how bad he was and if he hit a good shot, I would tell him he’s lucky,” Hebrink said. “I respect him a lot more now, but I’m still the same way when we play.”

Hebrink is off to a 6-6 start to the season, while Schammel, who was Austin’s No. 1 player as a freshman, is 7-5. Schammel doesn’t mind the trash talk from Hebrink because he’s set on helping Hebrink improve.

“He’s a great athlete. It’s good to start with someone like that who’s young and willing to learn. I tell him to change something and he changes it right away. It has an almost immediate impact on his game and he always gets better,” Schammel said. “He gets the ball back and he’s winning matches that way. I just overpower kids, but he’s also a lot younger than me and he will grow into a different style.”

Schammel has come a long way on the tennis court in just five years. He played baseball until he was in seventh grade when his older sister, who was the tennis team’s manager, asked him to come out and play.

Austin head coach Jeff Anderson has seen Schammel grow into a player who can push his opponents deep into matches with his physical grit.

“Strength-wise it’s been an amazing change in two years. Joey’s put a ton of work in,” Anderson said. “He’s been playing in Rochester and he was invited to play in an exclusive tournament this summer. He’s gotten a lot better since he was a seventh grader and the fruits of his labor are starting to pay off.”

The Packers have an incredibly young and inexperienced roster this year and the success of Schammel and Hebrink has helped the entire team improve. Anderson said that Hebrink has shown as much improvement as anyone. The seventh-grader lost his first two matches of the season by scores of 6-0, 6-0, but he’s found his confidence as he’s started winning.

“Playing with Joey will make you better. Cole’s a confident kid,” Anderson said. “He comes from a pretty athletic family and being the youngest in an athletic family, you’ve got to be confident. His confidence and his ability to athletically do some things is a huge advantage for him.”

Hebrink has a lot of tennis in front of him, but he’s already made one big step in his time on court, especially when it comes to family bragging rights.

“I finally beat my mom a couple of times,” he said. “I get a lot of help from my family.”

Schammel also had a slow start to this season, but now he’s playing at a higher level than he originally thought possible.

“I just needed to settle down,” Schammel said. “ I had a couple of tough matches to start the year and I just had to trust my game. I got into a good rhythm and then you start to beat guys that you didn’t think you could beat before.”