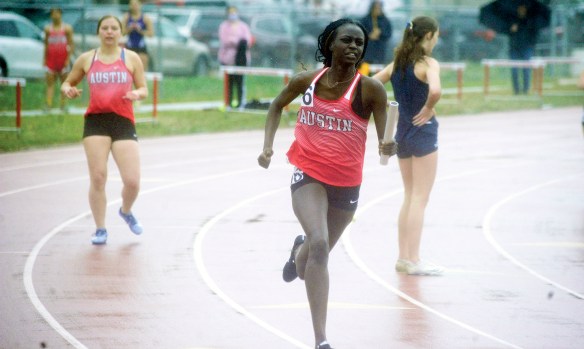 Muye Ojulu takes off on a relay for Austin at Larry Gilbertson Track and Field Tuesday. Rocky Hulne/sports@austindailyherald.com 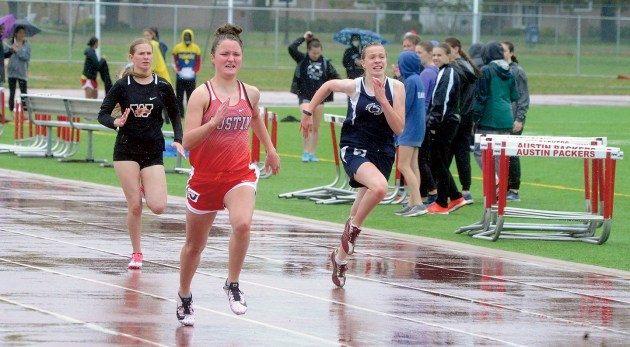 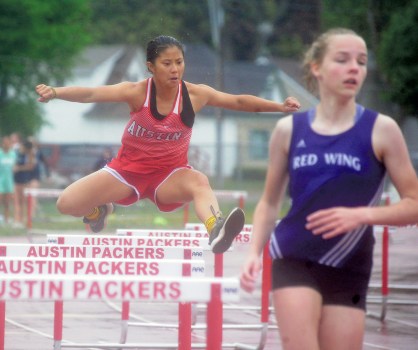 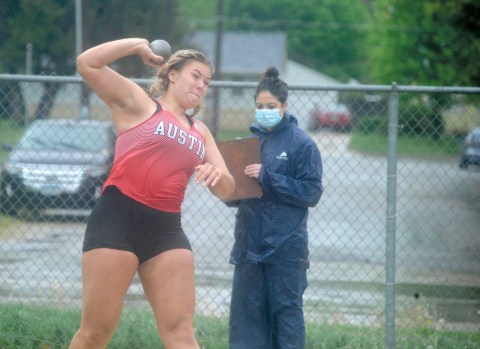 While track and field is normally a non-contact sport, Austin athletes spent a good amount of time dodging puddles and running through driving rain as they placed third in a triangular at Larry Gilbertson Track and Field Tuesday.

For Austin senior Briella Wempner, the meet was her final home competition and she made the most of it by taking third in 100-meter hurdles with a time of 19.15 seconds.

“It was very different. We had to deal with the environmental factors outside. I’ve never ran a track meet in the rain before,” Wempner said. “I had to squint to see during the hurdles and I was nervous to fall. Thankfully I made it through the event and I had a PR. Instead of looking at it as a negative, I made it fun.”

While runners were able to keep their footing and balance intact, jumpers had to play a little bit of a guessing game. Austin sophomore Sarah Wangen certainly put her agility to the test in the long jump, hurdles and pole vault, where she took second with a height of seven-feet.

“It was interesting. It was a different challenge, whether I was running, jumping or pole vaulting,” Wangen said. “I think I just had to focus on having fun, and not being too serious. I just had to calm down. Personally, I don’t think I did the best I could’ve done, but I thought I did pretty well on the pole vault.”