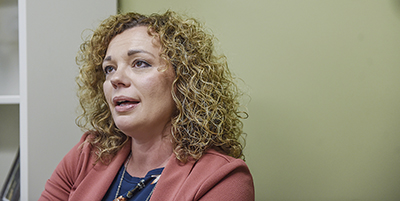 Health and Human Services Director Crystal Peterson talks about taking over the position in the middle of the COVID-19 pandemic Thursday afternoon. Eric Johnson/photodesk@austindailyherald.com

Stepping toward normal, Crystal Peterson looks back to taking over as head of HHS in the middle of pandemic

On Aug. 28, 2020, the State of Minnesota reported 850 new cases of COVID-19 while in Mower County, there were five new cases in the midst of a rolling three-a-day average.

By that point in the pandemic, Mower had seen 1,170 cases of COVID-19, one of the highest per capita in the state of Minnesota.

It was also the first day of Crystal Peterson’s new position as director of Mower County’s Health and Human Services.

“This was my first interaction in the COVID world,” Peterson said Thursday, as she looked back upon her time in the position

Until that point, Peterson had been Human Services division manager, eventually taking over for Lisa Kocer, who retired in August.

It was a trial by fire.

“I had gotten some help from Lisa before she left and attended EOC (Emergency Operations Center) meetings to understand the incident command process,” Peterson said. “Get brought up to speed on COVID because a majority of my background is in human services.”

These days, things have eased somewhat for Peterson and the staff of Mower County Health and Human Services. It’s been over a year that has included a rollercoaster’s worth of ups and downs, but perhaps more importantly, the vaccines have made the positive impact many hoped for.

It’s a far cry from those first few months that saw Peterson seemingly running from one meeting to the next to try and keep on top of the pandemic, which at that point threatened to run away unchecked in the United States.

“The biggest shock was diving in head first,” Peterson said. “My background is in public health, not nursing. I still have Pam (Kellogg) and we work really closely together. That helped me the first several months.”

“Things were just changing so radically,” she added.

Those changes included the varying restrictions issued by the state, recommendations from the Centers for Disease Control and the federal government.

However, the one thing Peterson and others in the field had on the horizon was the promise of the vaccine. Pfizer would be the first to gain emergency approval from the FDA, followed by Moderna.

At the same time came a new set of hurdles in regard to the tiers laid out by the state as to who would get the shots first.

The tiers themselves were designed to ensure an orderly process was in place to get vaccines out to those who needed it most — the elderly and emergency responders.

But it also created some confusion for the public.

“Knowing in the back of our minds the vaccine was coming and what does that mean for us?” Peterson said. “Are we giving it? Are we supporting community providers?”

That moment came in January when the first 100 doses of the Moderna vaccine were given to emergency workers in Austin.

Prior to that, in December, Mayo Clinic Health Systems-Austin gave out it’s first shots of the Pfizer vaccine.

Normal was still a long way out, but this was finally hope going in arms.

“It was a celebration,” Peterson said, smiling. “We have a picture of the nurses that took it out of the package for the first time. It was exciting thinking we were part of history.”

However, that excitement had to be tempered in the face of how slowly the cogs of the machine worked early on. These days, HHS is actively looking for people to vaccinate as supply has become regular. However, in January and February, there were still a lot of unknowns.

“We were excited to hit the ground running,” Peterson said. “Were we getting 100 doses or no doses?”

Of course, with the ongoing pandemic, it’s easy to forget that HHS still had its other work in areas like child support, children’s mental health, adult mental health and child protection — an area Peterson herself once worked. All of these things were made more difficult when staff were sent to work from home in March of 2020, when Gov. Tim Walz shut the state down.

“You just get to a point of what do we do here besides COVID?” Peterson said. “We still have a job outside of COVID. Personally, I’m really ready to explore what it is.”

Complete normal is still a ways off and the COVID-19 pandemic is going to be a shadow that needs dealing with, but Peterson, like so many others, is finding time to take a breath and look back at the past few months she has been a director.

Despite all of the hardships, HHS has more than risen to the occasion.

“They have accomplished more than I thought we would,” Peterson said. “We have a dozen nurses putting shots in arms, but it takes more people than shot-givers. There were nights they worked until 11 p.m. Giving shots at Hormel, we were onsite and setting up at 5 a.m., working weekends. They were super resilient and completely rose to the challenge.”

At the same time, there is still more work laying ahead. Peterson and HHS will now have to determine how the COVID-19 pandemic has changed the department.

“That’s something we need to sit down and think about,” she said. “How do we prepare for the next pandemic? Is it staffing structure, funding so when the next time this comes around we aren’t recreating the wheel? We hope to take a lot of lessons out of this.”