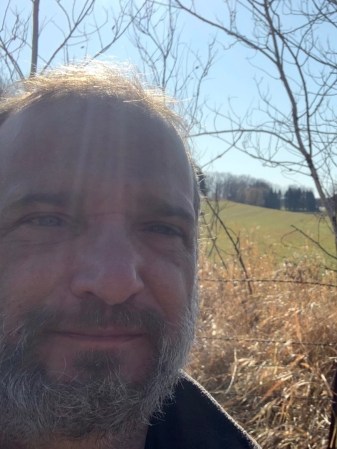 Jim was born on February 23, 1969, to Mary and Lynn McAlister. He graduated from Austin High School in 1987. Jim was a valued employee at Abbot Northwestern Hospital / Allina Health for over 30 years, his coworkers enjoyed his quick wit, dedication, ability to breeze through complex technical issues, and mischievous grin. The friendships made during his long career lasted a lifetime and meant the world to him. A special thanks to the medical staff at Abbot that provided such compassionate care in his final days.

Jim became an avid bicyclist over the past few years. He loved to trek the local trails around the Twin Cities and do some rogue camping off those same paths. And even when not feeling the best he found a way to continue, investing in an electric bike to extend the adventure. One year ago, as civil unrest wracked his community and a global pandemic spread, Jim got on his wheels and rode into the fray. A fellow traveler joined him randomly that night; together they peddled into the chaos, experiencing the flow of history first hand. Jim was an explorer to the end. That curiosity about the universe lives  on in the one he loved the most, his daughter Sadie.

He is survived by his mother Mary McAlister, step-mother Linda McAlister, brother Dan McAlister, and daughter Sadie. He was preceded in death by his father Lynn McAlister, nephew Evan McAlister, cousin Lisa Whalen and grandparents.

A visitation will take place at Mayer Funeral Home in Austin, MN from 1:00-3:00 on Saturday, May 29. A Celebration of Life will follow the visitation at the Thissen Farm, Blooming Prairie.