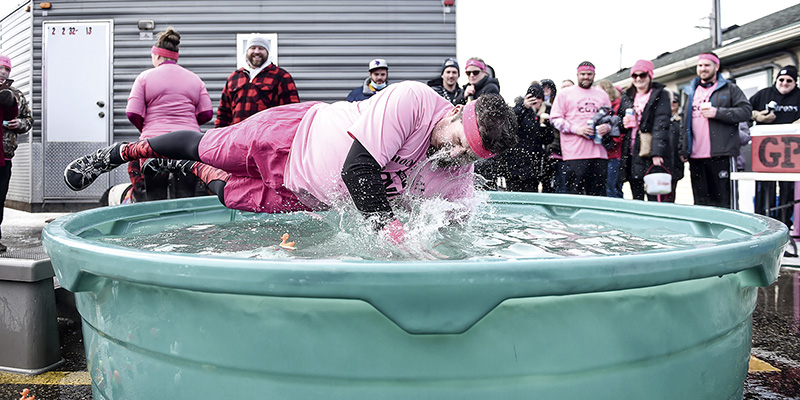 Mike Petersen hits the water during his jump at Hoot & Ole’s and Judy's Too in February. Herald file photo

The COVID-19 pandemic didn’t suppress area residents’ desire to raise funds for cancer research, as evidenced by a donation of $32,500 from the Dutchtown Jumpers to the Hormel Institute on Tuesday.

Jeremy Olson, owner of Hoot & Ole’s and Judy’s Too and one of the founding members of the Dutchtown Jumpers, presented a check for the full amount to Hormel Institute Executive Director Dr. Robert Clarke. The funds will go toward the Institute’s cancer research.

A press conference was held Tuesday morning at The Hormel Institute to announce over $36,000 raised by The Dutchtown Jumpers and donated to the Institute. Eric Johnson/photodesk@austindailyherald.com

“It’s a great group of people,” Olson said of the Dutchtown Jumpers.

Despite the challenges of the pandemic, which temporarily shut down many businesses, including his own, Olson noted that research at the Hormel Institute does not stop. To raise so much during such a difficult time says a lot about the residents of Mower County, he said.

“It’s just awesome how everybody gets behind everything that we do,” Olson said. “Everybody wants to raise a little money and help out. The day of our (2021) jump we raised $26,500 on one Saturday afternoon, and we had just decided to put a cattle tank in the parking lot to have a little fun.”

Olson said the Dutchtown Jumpers have raised just shy of $190,000 for cancer research since 2014.