Viking boys hope to keep rolling in the state semifinals 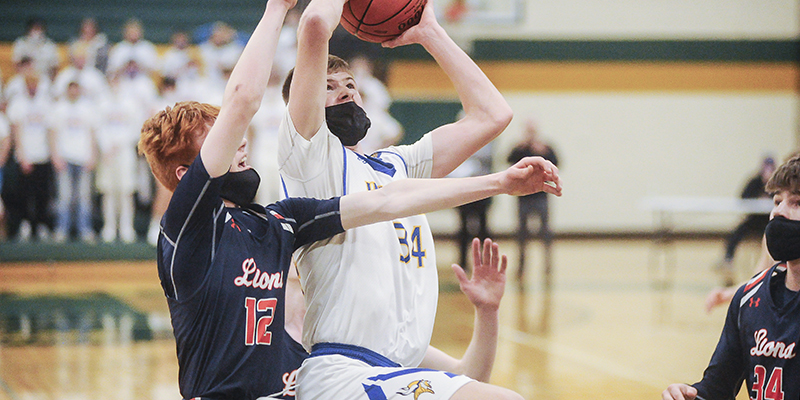 Ethan Slaathaug takes it to the rim against Micah Strand in the Minnesota Class A quarterfinals. Herald File Photo

In a year like any other, the Hayfield boys basketball team is now participating in an extremely unique Minnesota Class A State Boys Basketball Tournament that gives them a week instead of a day or two to scout out their semifinal opponent.

But the Vikings probably don’t need seven days to get ready for Badger/Greenbush-Middle River, who they play at Target Center at noon Wednesday. The Vikings (19-4 overall) are mostly concerned with keeping up the style of play that has helped them win with balance and efficiency throughout this postseason.

“We’re clicking right now and they feed off each other,” Hayfield head coach Chris Pack said. “Kobe (Foster’s) job is to hound their best perimeter scorer and he knows when it’s his time to shoot and not to shoot. Easton (Fritcher) has been a rebounder and defender, my kid (Ethan Pack) is just a shooter and he’s made some big shots. Isaac (Matti) and Ethan (Slaathaug) are the creators who score and create for others. The roles are very well defined and everyone is playing their roles well.”

This is the first state tournament in program history for the Gators (20-3 overall) and they were led by Kobey Dallager’s 25 points and Adam Benke’s 15 in a 58-52 win over Deer River in the state quarterfinals March 31.

“They’re kind of a scrappy team and they have a couple of good guards with some size,” Pack said. “They don’t really wow you, but they play good defense and they switch everything. We’re hoping we can get some mismatches and take advantage.”

Hayfield relied completely on its starting five in its 62-43 semifinal win over Legacy Christian, but Pack isn’t sure if that will happen again.

“I doubt that we’ll be able to go iron five like we did in the last game, but we do get the benefit of TV timeouts, so who knows? The bench will be ready as needed as well,” Pack said.

Overall, the Class A tournament has been unpredictable as No. 4 North seeded Hancock and No. 3 South seeded Sleepy Eye Saint Mary’s will meet in the other semifinal at 10 a.m. on April 7 in Target Center.

The Minnesota Class A state title game is set for 1 p.m. on April 10 at Target Center.