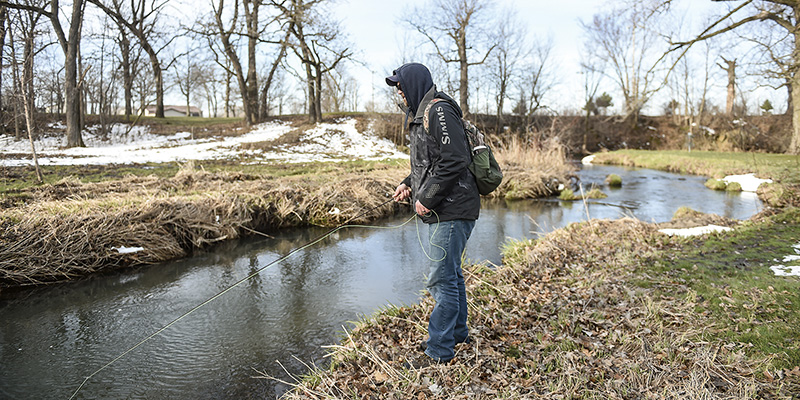 Hundreds of rainbow trout once again are headed for Austin’s biggest park this spring in hopes of enticing anglers of all ages to catch them.

For the second-straight spring, the Minnesota Department of Natural Resources (DNR) will stock rainbow trout at Todd Park in Wolf Creek, which flows into the Cedar River State Water Trail about one mile downstream from the park.

Staff with the DNR’s Waterville area fisheries plan to stock 300 rainbows this week ahead of the state’s trout opener on Saturday, April 17, at which time – through Sept. 14 – anglers can keep the trout they catch. Since Jan. 1, trout fishing has been catch-and-release only.

A few weeks after the opener, the DNR will stock another 300 rainbows at Todd Park, said Craig Soupir, supervisor for the DNR’s Waterville office who oversees the “put-and-take” fishery for Wolf Creek using trout raised at the Lanesboro State Fish Hatchery.

During the regular trout season, anglers can possess no more than five trout combined (brook, brown, rainbow and splake) and no more than one greater than 16 inches long. You also need a current Minnesota fishing license and trout stamp.

DNR expects this year’s rainbows to be a little larger than last year’s group, Soupir said, because they will be “advanced yearlings,” which weren’t available in 2020 from the Lanesboro hatchery due to a remodeling project.

Officials also are hopeful some trout from the 2020 stocking might have survived the winter and remain in Wolf Creek. Last month, a Waseca, Minn., angler caught and released a good-sized rainbow at Todd Park, providing hope for more like it.

For Wolf — the only Mower County stream stocked by the DNR for trout – anglers seeking a meal of fish are encouraged to keep their catch. Rainbows stocked in Wolf are a catchable size, making them ideal for the DNR’s goal of a “put-and-take” fishery. The rainbow trout stocked also are too large for predator fish to eat, reserving them only for anglers.

Given that an increased catch is the goal of a “put-and-take” stocking, a higher number of fish are stocked than the stream could support naturally, Soupir said. That is why harvest is encouraged but not required, he said; anglers who want don’t want to keep the fish can release them back to the stream and give the opportunity to another angler.

CRWD received dozens of photos in 2020 from the public of children and adults with trout caught at Todd Park.

“We really can’t say enough about this new fishery and opportunity,” said Jason Weis, chair of the CRWD Board of Managers. “It has been very exciting for the community.”

Austin Parks & Recreation staff saw an uptick in activity at Todd Park. Locals told staff that they had not seen that much use of Wolf Creek for fishing in 40 years, said Kevin Nelson, director of Park & Rec. Last year, Parks & Rec staff regularly saw people fishing from the banks of the creek, including at least one person who tried fly fishing the narrow stream.

Aside from local anglers, the new Wolf Creek trout fishery also has drawn visitors to Todd Park to cast their line. One family that visited Austin last year told Discover Austin staff that the first trout caught by their child happened in Austin, said Nancy Schnable, executive director of the tourism bureau.

“It was wonderful to see people making Austin a trout-fishing destination,” Schnable said. “I enjoy hearing visitors’ stories, knowing memories are being made and people are enjoying the outdoors.”

Todd Park, with nearly 9,000 feet of public shoreline along Wolf, was stocked by the DNR more than 30 years ago with young trout. That was stopped in the late 1980s due to predator fish, such as bass and northern pike, thwarting those efforts.

James Fett, CRWD’s watershed technician, proposed in 2019 the trout fishery for Wolf Creek to the DNR after measuring the stream’s temperature for two years. Fett, who caught several rainbows with his wife, Pam, at Todd Park for the April 2020 trout opener, also has led efforts to enroll and convert about 205 acres of cropland into permanent prairie and wetlands immediately upstream from the park, helping to protect the new fishery.

As it winds through Todd Park, Wolf Creek’s temperatures are conducive to trout in large part thanks to a spring-fed pond in the park that flows immediately into the stream. Even on the warmest days of the year, the creek’s temperature rarely exceeds 65 degrees, Fett said, resulting in a suitable, low-stress environment for trout.

CRWD and DNR officials were pleased last year to get reports of trout being harvested throughout July when Wolf is at its warmest, Fett said. Trout also continued to be spotted into September in Wolf Creek.

Some locals reported rainbow trout caught in the Cedar River upstream from its confluence with Wolf. Another angler reported fishing with someone who reeled in a rainbow trout from the Cedar last spring at the DNR pier at Austin Mill Pond.

Anglers are encouraged to share photos from fishing at Todd Park and elsewhere in the Cedar River Watershed. Images can be emailed to tim@mowerdistrict.org or posted on CRWD’s Facebook page: www.facebook.com/cedarriverwd