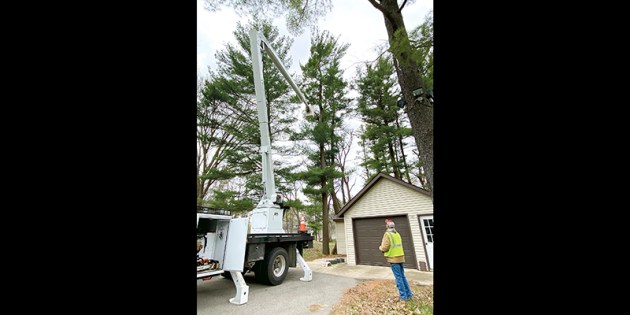 The Austin Parks and Recreation boom truck lifts Luke Reese up to the owl’s nest to replace the owlet that had fallen out. Photo provided 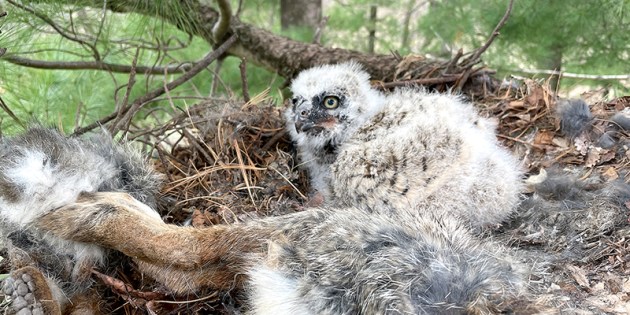 The rescued owlet, back home in its nest. Photo provided 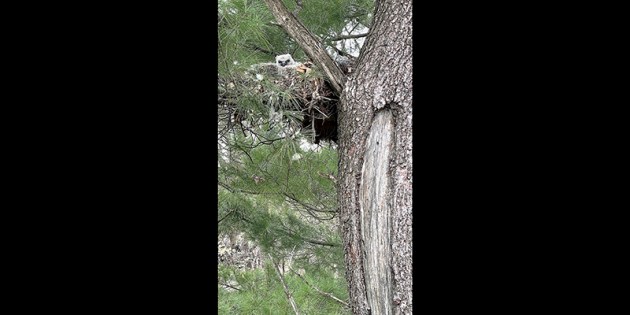 The rescued owlet looks back down at its rescuers after it was placed back in its nest. Photo provided 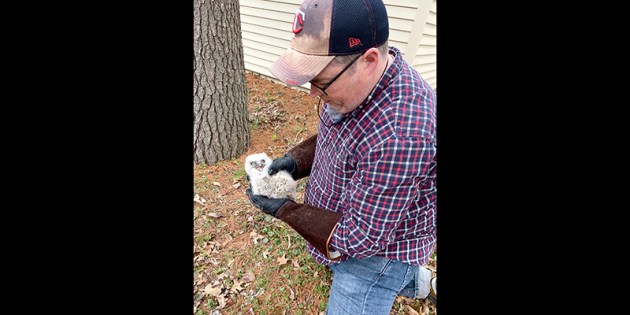 Jay C. Hormel Nature Center Executive Director/Naturalist Luke Reese handles an owlet that had fallen out of its nest. It was later placed back into its nest and was the 300th raptor rescue by the Nature Center. Photo provided

On Friday, staff from the Jay C. Hormel Nature Center rescued its 300th raptor with an adorable happy ending.

Mark Coffey alerted the Nature Center that he had observed two baby great-horned owls on the ground. Answering the call, Executive Director Luke Reese went to the spot and found the two owls. Unfortunately, one had already died.

“The one likely died from the fall, but the other one looked okay,” Reese said Monday morning. “We brought it back here to check it out.”

Staff found that the owlet appeared healthy, aside from being stressed by its current situation, and suspected the two owls were on the ground because of crows who were harassing the parents and the chicks, which can happen because of a defense strategy used by crows to prevent the great-horned owls from hunting them.

However, in this case it appeared that the parents of the owlets were still watching out for their young.

“They were right there at the base of a white pine tree,” Reese said. “We could tell it was on the ground, but it had gotten fed. There were remains of food the parents would have brought.”

After a call to the University of Minnesota Raptor Center, Reese was urged to return the owlets to the nest if possible.

As it turned out, it was.

“Timing wise it worked out,” Reese said. “We got the Parks and Rec boom truck they use for tree trimming. They hooked me into the bucket and sent me up there.”

Once at the nest, Reese found more evidence that the parents were still about.

“There was a pretty fresh rabbit waiting,” he said. “So I know the parents weren’t too far away.”

While it’s hard to see the current status of the owl because of the nest’s position, Reese is hopeful that it found a new life and that the parents were able to connect once again with their lost owlet.

“The owl was in pretty good shape,” Reese said. “Once it got back in the nest it seemed much more comfortable in its surroundings.”

This is just one of many success stories the Nature Center has had over the years in rescuing raptors throughout the county.

Granted, not all of the 300 rescues have had happy endings. Reese said the goal is to make each raptor as comfortable as possible, regardless of the outcome.

“On a regular raptor rescue, they are usually in pretty tough shape,” Reese said. “It’s always nice to be able to help the bird, even if the bird can’t be saved. Even if it’s putting it out of its pain.”

“Mike Williams has been a great partner with us,” Reese said. “If we’re not sure, he’ll squeeze us in and take a look at (the bird).”

Reese said that the Nature Center will continue helping raptors in need no matter what that help entails, though he also stresses that all they can really rescue is raptors.

“We just don’t have the capacity to do more,” Reese said.

It’s hard to put a damper on the Nature Center’s most recent success and Reese said it’s a good feeling for all the staff to be able to play a part in another raptor’s renewed chance at life.