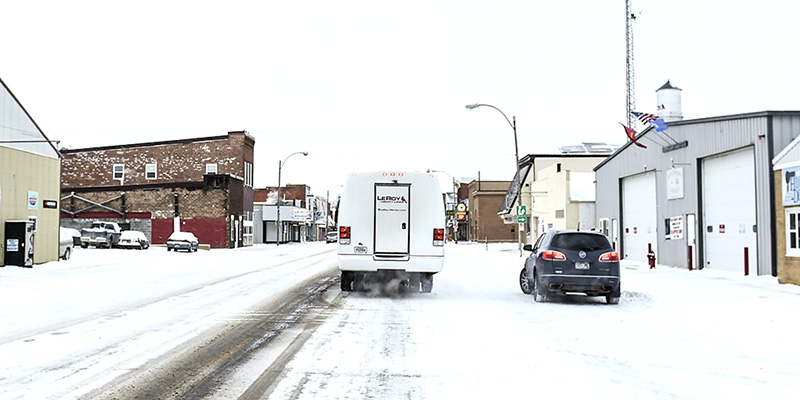 Blow from COVID pandemic too much for charter, commuter service

For just about five years, LeRoy Lines has provided a convenient shuttle between southeast Minnesota communities and Rochester. Unfortunately, the bus service has made its last stop.

A causality of the COVID-19 pandemic, LeRoy Lines announced recently that it was halting service of both its commuter bus service and its charter bus service.

“We considered a relaunch in December,” said Axel Gumbel, a member of the LeRoy Economic Authority, who was in charge of day-to-day operations of LeRoy Lines. “But we pushed that back. It’s not as simple as,’ we come back tomorrow.’”

By this point, LeRoy Lines’ story is a familiar one. They suspended service in April of 2020 due to the pandemic and had already seen a drop in ridership.

Just as LeRoy Lines was looking at coming back online, it took another shot when Mayo Clinic announced it was doing away with its commuter bus subsidy.

“We kept considering our options and that of course was complicated,” Gumbel said. “The reality is with no more subsidy the prices would go up quite a bit for passengers.”

In the weeks that followed, LeRoy Lines sent out a number surveys to its riders who were still willing to ride LeRoy Lines. What they heard back proved optimistic, if not requiring a needed change in routes.

“The results [the surveys] gave us reason to believe there was a need for commuter service,” Gumbel said, but added, “Part of our survey revealed the routes as they had been — LeRoy, Chester (Iowa), Grand Meadow and Rochester, was no longer sustainable.”

The idea that followed was to remove Grand Meadow from the route and substitute it for Spring Valley, which had been dropped by Rochester City Lines.

In March of this year, they launched one bus, but realized the number of riders wasn’t adding up.

“Pretty quickly the numbers did not turn out to be what they expected based on our surveys,” Gumbel said. “There were no more than a half a dozen riders. By mid-March we had to quickly change to something to make this sustainable.”

A new round of surveys were sent out with more input that saw riders wanting to see the commuter buses arrive in Rochester one hour earlier and return home one hour earlier. The new schedule was launched on April 1, but again, the numbers were sagging.

“The numbers were just as disappointing,” Gumbel said. “There’s very little room for error after you’ve been out of business for a year. It just didn’t make sense to continue it. We had no more than four, five passengers. You can’t run a 40-seater bus with just that.”

After the decision to shut down the commuter side of LeRoy Lines, the question arose of what to do about the charter side of things. Reservations had already been made as far out as June and they were seeing a strong resurgence in that side of the business.

But it isn’t enough to lower fears as to the longevity of LeRoy Lines. The costs were just becoming too much, including the extra maintenance added when getting buses that had been shut down for the better part of a year up and running again.

There was also the added financial pressures on the City of LeRoy.

“The other thing that weighed heavily on our minds was whether a charter-only operation would still fulfill our original mission to benefit the citizens of LeRoy,” Gumbel said. “Our service was always subsidized by the City, but that would be hard to justify in a charter service operation that primarily services outside groups.”

And so LeRoy Lines made the difficult decision to shut down the entirety of the service; however, they will honor reservations as far out as June 30 without taking on any more reservations.

“We didn’t want to leave anybody hanging,” Gumbel said.

Despite the unfortunate news, LeRoy Lines was a bright point for the community of LeRoy, offering something many towns its size wouldn’t think of pursuing.

“I think if it wasn’t for the pandemic, this was a great success,” Gumbel said. “We’re proud of what we accomplished. We had support and we operated six buses as part of our operation. Not to mention how this sort of thing put us on the map. There’s nothing better than driving your city logo around. We’re very sad this is going away.”

For the time being, it’s unknown what will happen with the buses themselves, but Gumbel said the most likely scenario will be to sell the vehicles at some point.

Regardless of the outcome, it can’t take away from the success LeRoy Lines has enjoyed since opening in 2016.

“If you would have asked me 10 years ago are we going to have a bus service, I would have laughed,” Gumbel said. “We looked at it and made it work and that’s awesome.”