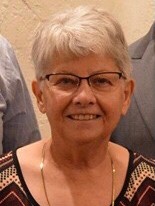 Karen Lee McMasters, 70 of Austin, Minnesota, passed away on Monday, April 12, 2021 surrounded by her family at home.

Karen was born on July 1, 1950 in Blue Earth, Minnesota to Eldon and Louella (Honstad) Peter. She grew up in Austin, Minnesota, attended Austin Schools, and graduated with the Class of 1968 from Austin High School.

On February 10, 1968 Karen was united in marriage to John McMasters. They raised their family and have resided in Austin their entire married life. In 1989 she returned to school and earned her LPN degree from Riverland College in Austin. Karen began her nursing career at St. Olaf Hospital in Austin. In 1994 she earned her RN degree and continued at St. Olaf Hospital until her retirement in the fall of 2010 because of health concerns.

Over the years Karen, John and the kids enjoyed many summers up north on Lake Pimushe near Bemidji. In 2002 they completed construction on their cabin on Moose Lake and have continued to enjoy their time in the Bemidji area. For the last several years, they have wintered in Green Valley, Arizona. Karen was a Twins fan, and treasured time spent with her family.

She was preceded in death by her parents, Eldon and Louella Peter; father-in-law, William McMasters; mother-in-law, Gladys (Charles) McMasters Jones.