Jump Around: Austin’s Walsh is picking up where she left off 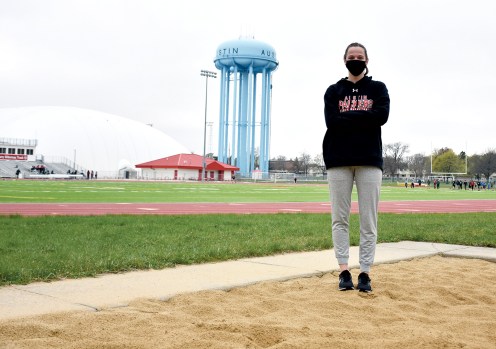 Austin sophomore Olivia Walsh is starting to get back on track in the high jump and triple for the Packers after being out of action for two years due to the pandemic. Rocky Hulne/sports@austindailyherald.com 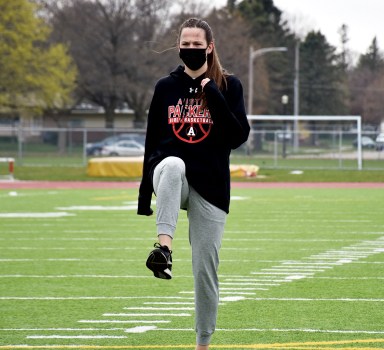 For many sophomores competing in track and field this spring, the season is simply a chance to get reacquainted with a sport that was shut down in 2020.

Austin sophomore Olivia Walsh is relearning how to compete in the high jump and triple jump after a two-year hiatus, but she’s already shown a hint of the potential she showed as an All-District athlete at Treasure Valley Catholic Middle School in Boise, Idaho, in 2019. Walsh had a personal record high jump height of 5 feet, 3-inches and a PR triple jump of 34-feet, 10-inches in Idaho. This spring, Walsh has hit a high jump of 4-10 and a triple jump of 33-1 for the Packers.

“I’m still working to get back to where I was in eighth grade, but with having two years off it’s a little tough. I think I’m doing pretty well right now,” Walsh said. “It’s pretty natural to me. I’ve been doing it since I was in sixth grade. Relearning the rotation for high jump is probably the hardest thing, but I think I’m back in a rhythm now.”

Not too many athletes have the versatility that Walsh brings to the Packers. In this past year, Walsh has swam a 100-yard freestyle in under a minute for the Packer swim team and she was also a key player for the Packer girls basketball team, which played in the Minnesota Class AAA State Tournament.

Walsh is currently balancing track and field with her AAU season, where Walsh plays for the Minnesota Fury. All of that triple jumping and high jumping has given Walsh a big advantage on the boards with an improved vertical jump.

Walsh has embraced the challenge of being a multi-sport athlete, even when it means having less time to rest and relax.

“It’s not really anything I’m not used to. I’m still playing basketball, and I’m just adding track in,” Walsh said. “I’ve been doing multiple sports since I was really young. I’m used to it and I take the time that I’m given to rest.”

As Walsh continues to make improvements in her jumps this spring, it all comes back to her jumping coach in Idaho, who got Walsh going at an early age and still inspires her today. Walsh’s competitive fire has grown in Austin and she’s now thinking of the possibility of competing in basketball or track and field at the collegiate level.

“I definitely learned to not take competing for granted when I missed part of the swimming season with a broken foot,” Walsh said. “I’m really glad to be recovered and I had a lot of fun in basketball and now track. I want to keep improving and I hope to do well in sections and hopefully go to state in track this year.”