Handshake and a smile 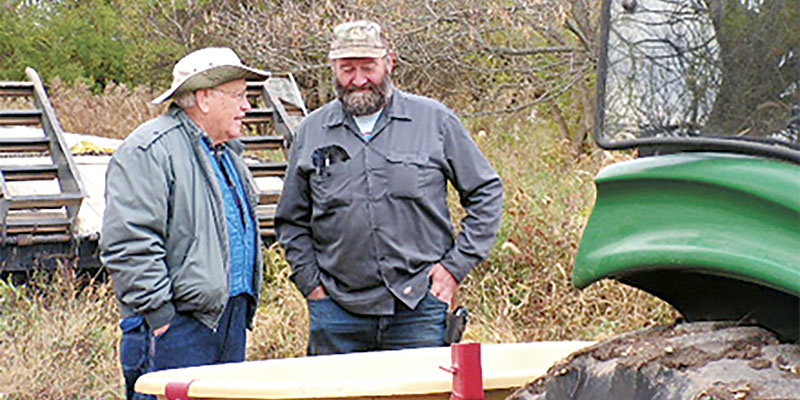 Throughout the years of conservation work and land acquisitions, John Beckel found the most important part was simply talking. Photo provided

From those who knew him best, John Beckel’s work in land conservation started and ended in a belief of people doing what was best for the community.

“He was so confident that if we went out and asked people … be very transparent and they would support us … and the community did,” said long time friend Dave Cole.

Beckel passed away on April 4 at the age of 96, but he leaves behind a legacy of conservation that stretches far and wide having worked on several large land acquisition projects for the Ramsey Mill Pond Wildlife Management Area north of Austin and the Jay C. Hormel Nature Center.

He achieved much of this success in a quiet manner that came from a simple and personal approach that consisted of talking with landowners and getting them invested in conservation of the land.

“He had such a pleasant demeanor when talking to people,” said former Nature Center Director Larry Dolphin.

Dolphin worked on four land acquisitions for the Nature Center, starting with a 62 acre parcel in 2003 and a 148 acre acquisition in 2004. Restoration of the pieces of land started between one and two years following the acquisitions.

Two more acquisitions followed in 2005 and 2015 for 11 and 10 acres respectively, culminating in a total of 231 acres that would eventually be restored to prairie land.

“I knew I could count on him,” Dolphin said. “I knew we would go forward and make it happen.”

Prior to acquisitions for the Nature Center, Beckel was instrumental in securing 205 acres of land over a 22-year period starting in 1972 that would become the Ramsey Mill Pond WMA.

Further work would see the addition of 92 acres adjacent to the original 205 acres.

In total, Beckel met with five different landowners to bring the deal to fruition and he did it through patience and a willingness to work with landowners.

In fact, many of his friends recognized that this kind of approach was instrumental in the success of the plans.

“John’s personality is one that you really liked from the start,” said Dick Waldman, another longtime friend and neighbor of Beckel and his wife Verniece. “He’s so laid back and a congenial fellow.”

However, it wasn’t just the congenial side of John that made it possible to bring together so many land acquisitions. Coming from a  world of banking, Beckel was very familiar with the financing side of things as well as the ins and outs of finalizing transactions.

Even when things looked tough, Beckel found ways to get something accomplished, pushed forward by an overwhelming sense of positivity that the job would be completed.

John Beckel was a man people could count on, with an eye toward helping community. Photo provided

However, the city was unwilling to sell the land, choosing instead to keep that land for housing. At the same time, the City said it was possible to go north.

“I was there when his face lit up and without a word his expression said, ‘let’s make it happen. Let’s go north,’” Dolphin said. “As a result at least 232 acres were added to the Nature Center. As I see it, that’s at least 232 acres added for wildlife, hiking and skiing for all to enjoy.”

Cole also remembered a similar instance when the Land Expansion Committee was working toward acquiring just over 60 acres.

“The first meeting we were just going for 62 acres,” Cole remembered. “I felt confident we could do it. The second meeting, at the very end, he said we’re interested in getting a 148 acre parcel as well.”

Cole approached Beckel after the meeting and asked how they were going to do that, to which Beckel responded, “Dave, all we have to do is ask people.”

“I was really uncertain about being successful going after 210 acres,” Cole said. “He was so confident.”

Beckel’s work and willingness to better the community continued through his willingness to volunteer and work with groups for the general betterment of the land.

He was instrumental in the Izaak Walton League for 65 years and volunteered at the Fish and Game Building at the Mower County Fair for 25 years (1976 to 2000).

Oftentimes, Beckel would be a major ticket seller in the Ikes’ steak cookouts, a fundraiser for summer outdoor camps for kids.

He sold so much that in later years, when mobility became an issue, it was very noticeable just how much he did.

“He wasn’t able to get out there and talk to people and we suffered,” Cole said.

All of this is added to his work with the American Legion, The Knights of Columbus and other organizations.

Beckel’s reach extended outside of these groups as well, even when active work wasn’t being pursued.

Mower County Soil and Water Conservation District Manager Justin Hanson recalls working with Beckel from time to time, even though many of the big land acquisition projects had been completed in the county prior to Hanson arriving in 2004.

He remembers being swept up in Beckel’s own enthusiasm.

“He was always working on the next big thing,” Hanson said. “We would kind of do some brainstorming more than anything. He was fun to do that with because he was completely energized.”

In that kind of interaction, Hanson found a resource.

“He’s a great local resource,” he said. “You learn something from him every time you talk to him; that institutional knowledge. He was such a leader.”

Perhaps the most common theme of Beckel’s work, however, was how humble he was.

Beckel was a man that didn’t want the spotlight and believed that all he was doing was making the community better, whether that be with the Ikes, the American Legion or the Knights of Columbus.

“John inspired so many of us through the organizations he works with,” Cole said. “The biggest thing to me, when I thought I actually accomplished something, was to look over and see what John had done and I still hadn’t done enough. He does it so quietly.”

“I think I took away from John the feeling on how to work with people and how genuine he was,” Waldman said. “You could trust anything John said without a doubt.”