Eyes on the horizon 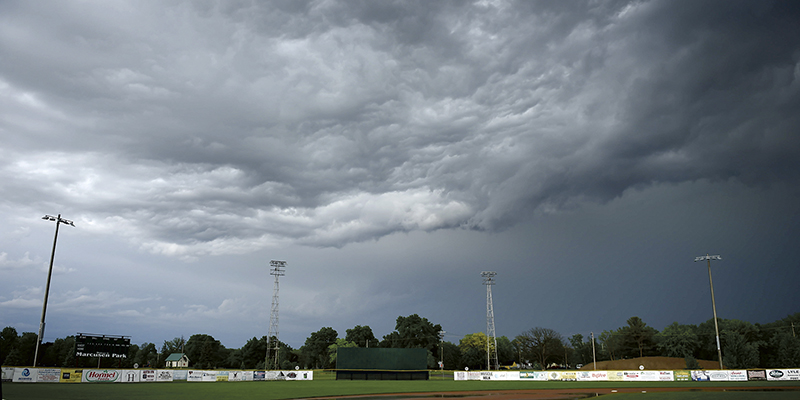 In 1996, director Jan de Bont brought us “Twister,” the thrilling story of storm chasers galavanting about Oklahoma in search of killer storms so our heroes — Jo (Helen Hunt) and Bill (Bill Paxton) -—  could put sensors in front of tornaodes to get much needed data.

While there are storm chasers who do try to put down similar sensors, storm spotting is largely left to rural fire departments, ambulance crews and law enforcement officials who work in close communication with the National Weather Service in La Crosse, Wisconsin.

“Our plan is we work with all the mutual aid fire departments,” said Amy Lammey, director of Mower County Emergency Management. “La Crosse sends out a daily briefing and as the storm gets closer,  we communicate with fire departments to get ready to spot.” 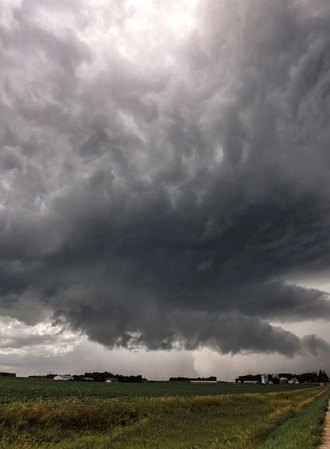 A band of the storms that had earlier produced tornados near Ellendale span across the skies north of Corning. Herald file photo

As we push deeper into April, Minnesota gets a little closer to peak tornado season. Mother Nature rarely conforms to traditional seasons when it comes to tornadoes, but NWS meteorologist Todd Shey, out of La Crosse, said tornadoes can strike throughout different parts of the year.

“The peak tornado season is from May to June, but they can occur as early as March,” Shey said.

These kinds of statistics recognize how important a trained spotter is, not only for the county they live in, but for the NWS as well.

“It makes the forecast that much more accurate and a lot of times gives us a better lead time,” said Shey, who also coordinates spotter training for the NWS. “We can look at something on radar and make assumptions as to what’s happening, but spotters just make it easier.”

Within the county, Mower County works closely with fire departments in all of its communities to create a chain of communication that can track storms as they March through the county.

But it’s more important than that. Mower County sits first in the La Crosse district of the NWS, but it relies on a close relationship with Freeborn County, in the Chanhassen district, as well.

Once the storm crosses into the county, the importance of rural emergency personnel becomes much more important.

“They’re invaluable to us,” Lammey said. “They are our eyes and ears for everything. We have a radio channel designated that they can report back to us. We use them for everything we need.”

“Generally they get the advanced notification through the Emergency Management Office,” Pike said of the rural departments. “They get a heads up to potentially what’s going on and are in a heightened state when the warnings start popping up. They go to their predetermined locations — top of a hill or near a particular reference point. It makes communicating a lot easier.”

As the storms roll through, spotters are trained to watch for a number of things within the storm that are then relayed to the NWS.

Some of those elements can include:

• Hail of three-quarters of an inch or larger;

• Rain greater than one inch per hour;

• Water over the roadways or roads impassable due to high water; and

• Damage related to the storm.

“That’s greatly appreciated by La Crosse,” Pike said. “They do value that information.”

However, simply finding a nice spot on a hill doesn’t make a storm spotter. Storms can be tricky to identify properly.

Scud clouds, gustnados and rain shafts can all appear to be tornados and even the cloud formations themselves can provide a challenge.

“A lot of the times it’s just the ability to see what you’re supposed to be seeing that’s hard,” Pike said.

Shey can relate, even from his end, where meteorologists use the latest in radar tracking technology to review the storms.

And that’s kind of the crux of the challenges rolled into one. While meteorologists can form a good idea of where the storm is going and how it’s going to act, even with the tech.

That’s where the process of using spotters can make it easier.

“You can’t get all of those details on a radar display,” Shey said. “Sometimes storms just don’t behave, but I think the whole process is getting better.”

However, even as spotters make it to the field, it still may not be fast enough to fully grasp a fast-moving storm. That’s where high-tech radios come into play.

“Sometimes you get there and sometimes you don’t,” Pike said. “We have the advantages of portables so if it’s a fast-moving thing happening at night and it’s too late to get a truck we have the opportunity to spot from our houses.”

There is still a lot we don’t know about tornados and how they come together and even as science gets closer unraveling their mysteries, spotters will continue to be on the front lines.

This is made stronger as counties like Mower begin consolidating a team approach to the process of calling out its spotters.

In recent years, Mower has brought together agencies and departments in the county to create a system that’s more unified.

“It’s a cooperative effort between fire departments and the Sheriffs office,” Lammey said. “That’s really important for the public to understand. The technology has improved, but weather is still weather. It’s unpredictable and will do what it’s going to do.”

Vikings are united and relaxed headed into state title…