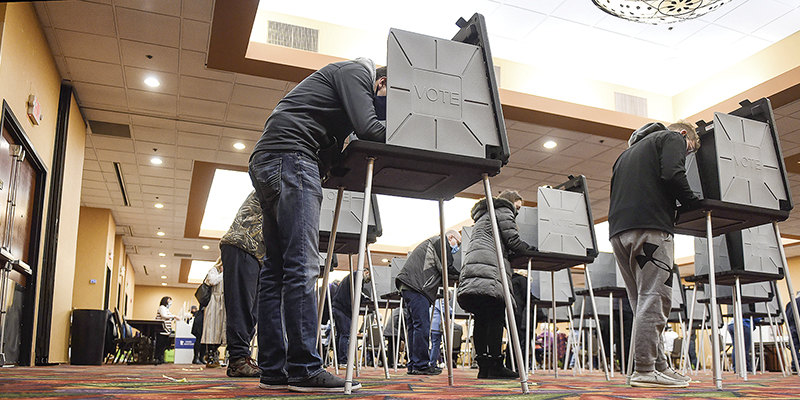 Early voters fill out their ballots this past November at the Holiday Inn and Convention Center. Herald file photo

Republicans in the Minnesota Senate rolled out a bill that would require a new provisional ballot system for people who register to vote on Election Day. The practice of voters verifying the eligibility of others through vouching would be eliminated.

Another provision would prohibit ranked-choice voting in the state.

In the House, majority Democrats are also proposing big changes to election law. Their bill would restore the voting rights of felons who have completed jail time.

It would also establish an automatic voter registration system tied to getting a driver’s license. In addition, there would no longer be a limit on the number of voters a person can assist at the polls.

DFL Secretary of State Steve Simon likes the House bill but not the Senate bill, which he contends would take the state backwards. Simon is especially concerned about Senate Republicans’ plan to change same day registration.

“This is not some little-used, boutique kind of service,” Simon said. “Hundreds of thousands of Minnesotans every single election use same-day registration, like a lot of people, and it’s popular, and this would take a hammer to it.”

House and Senate committees plan several hearings this week on the bills, but the wide differences may make compromise difficult.

Rep. Jim Nash, R-Waconia, doesn’t like the House DFL bill. He believes it is too partisan. Nash said the significant disagreement between the House and the Senate could prevent any election bill from becoming law.

“There’s been a long and respected history here that any elections provision that moves out of committee and off the floor has to be a bipartisan effort,” Nash said.