Back in action: A major setback during a pandemic couldn’t stop GM’s Copley 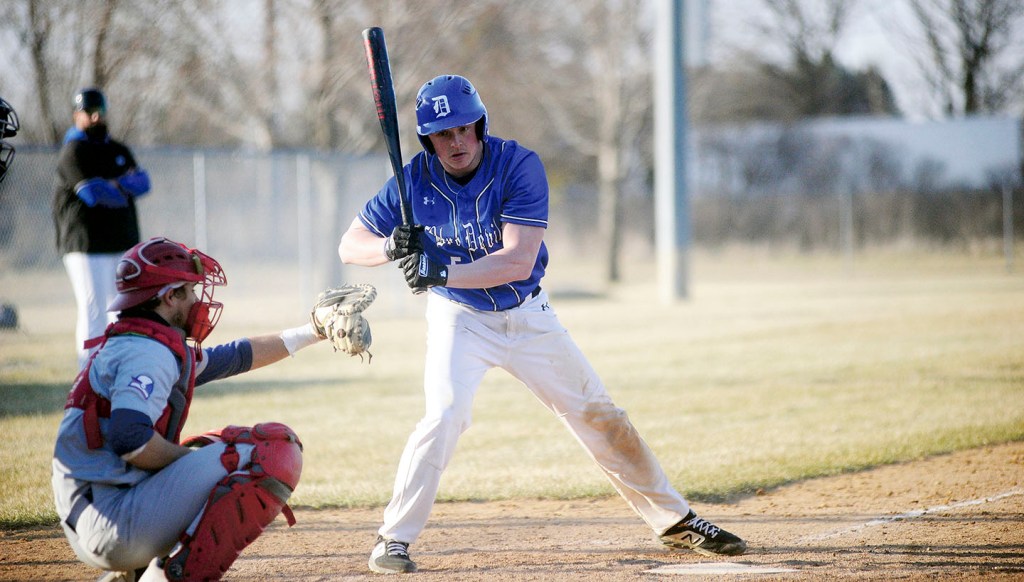 Grand Meadow grad Drew Copley watches a pitch against Northland Friday. Copley has thrived for the Blue Devils after almost quitting baseball, due to a injury last year. Rocky Hulne/sports@austindailyherald.com

Grand Meadow grad Drew Copley may have changed his look, but he’s still a force on the baseball field — even after nearly giving up on the sport he grew up loving.

After a year of rehab from Tommy John surgery, Copley has rediscovered his passion for baseball with the Riverland Community College baseball team this spring and he helped the Blue Devils sweep Northland by scores of  11-1 and 13-10 in Seltz Field Friday.

Copley made a big throw from third base for an out to end the top of the sixth inning of the first game, then he singled to right field, stole third base and scored the go-ahead run in the bottom of the sixth for RCC.

It’s a series of events he couldn’t have imagined when he found himself trying to begin a long rehabilitation process in the midst of a pandemic that kept hospitals closed for a period of time.

“I decided I was going to be done with baseball and I transferred to RCTC,” Copley said. “My gut feeling was that I had to give it one last shot and I couldn’t end on this. With the support of my family and friends, it’s been crazy this year. Rehab was difficult at times, especially without getting into Mayo and I had to do a lot of my own things.”

Copley has an on-base percentage of .609 with three doubles, one triple, four homers and 18 RBIs on the season.

His swing may be returning to him, but Copley had to shed his trademark long hair for a more consersative style due to majoring in law enforcement. Luckily, the haircut hasn’t slowed him down.

“Drew’s been around the game a long time and he’s had a lot of success with it,” RCC head coach Derek Hahn said. “He’s a difference maker for us and he makes a difference in almost every single game. He’s a hard working kid and he’s a weight room guy. He’s really changed his physique in the last year and a half.”

Copley still hasn’t been able to return to pitching and he hasn’t found a permanent spot on defense, but he’s hoping to get back on the mound in a game soon and he’s happy just to be playing baseball again.

“I’m slowly making progress to get back to my original self,” Copley said. “This team is a lot of fun. One through nine, anyone can hit and our defense has been playing well. Playing for coach Hahn is something that I really enjoy. I’m glad I transferred here, because I thought about playing for RCTC. I like the way Hahn coaches and I like how competitive he is. He’s a really good coach.”

Hahn was pumped up when he found out that Copley was coming back to RCC this spring.

“Drew’s gone through a lot in the last year, but he sticks with it,” Hahn said. “The second he picks up a bat, even if it’s in batting practice, he’s been a special player for us. He’s been hitting the ball for us all year long and he’s been getting some clutch hits.”

The Blue Devils (8-2 overall) didn’t get their usual trip down south this spring, but the team does have a lot of players with experience. The team has shown it  can put up runs as it has scored at least seven runs in nine of its first 10 contests.

“This has been the best spring that I can remember, but hopefully we can get a little bit warmer weather,” Hahn said. “The guys want to play and some of them have come a long way to play for this team. We’re filling our roster out and conference play doesn’t start for two weeks.”