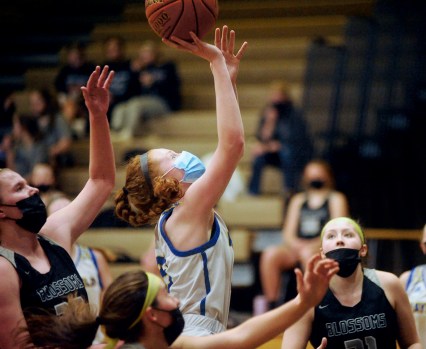 Hayfield’s Aine Stasko fights up a shot in traffic against the Awesome Blossoms in Blooming Prairie Friday. Rocky Hulne/sports@austindailyherald.com 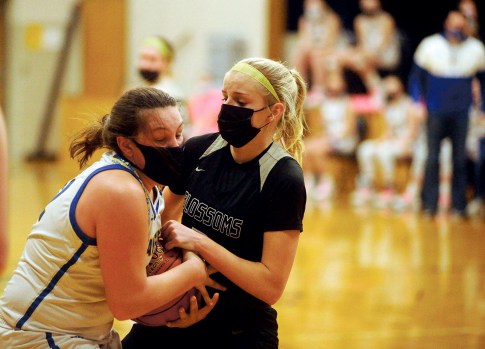 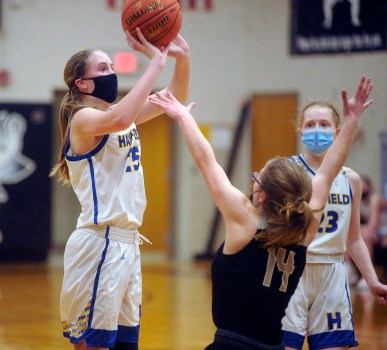 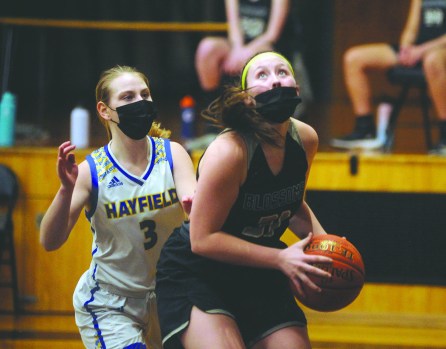 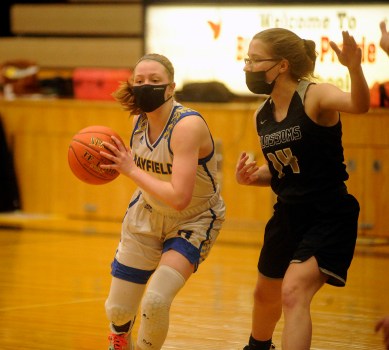 BLOOMING PRAIRIE — The Blooming Prairie girls basketball team started with a sprint, but it had to pace itself in the second half as it was able to fight off Hayfield 59-45 in BP Friday.

The Awesome Blossoms (14-1 overall, 11-0 Gopher) scored the first 13 points of the game over a four-minute stretch, but the Vikings clawed their way to within 37-31 after Aine Stasko converted a three-point play with 11:22 left in the game.

BP was able to respond when Megan Oswald scored to make it 39-31 and Bobbie Bruns knocked down a three-pointer to make it 42-32 with 10:05 left. Bruns, who played the entire game, finished with 18 points, four steals and three assists and Oswald, who played the entire second half, finished with 14 points, nine rebounds, four steals and four assists.

“Of all of our girls, any girl can go out and have a big night. It doesn’t matter who scores, we just want to win and that’s what makes the team work so well,” Bobbie said. “We just needed to stay composed and not let them speed us up in that press. They were all up in our face and they have some good guards. Emily Miller helped up defensively and she really stepped up her game. She helped us a lot.”

Oswald, a Jamestown University commit, has had a banner season as she has set new career records in rebounding and steals for BP. Oswald has nearly 300 steals and over 900 rebounds in her career.

“I have an appreciation for the record,” Oswald said. “Growing up, (BP and University of Northern Iowa grad) Taylor Hagen was a great player and I always wanted to play her style. This year has been fun.”

BP was shorthanded with Maggie Bruns out of the lineup, but head coach John Bruns was pleased with what his players gave him. Allison Krohnberg scored six of BP’s first eight points and she finished with 13.

“We had some kids play more minutes than they’re used to. They gutted through it,” John said. “We were tired in the first half. They really came after us and we were just gassed. That’s a really good win for us against a very well coached team. They’re tough.”