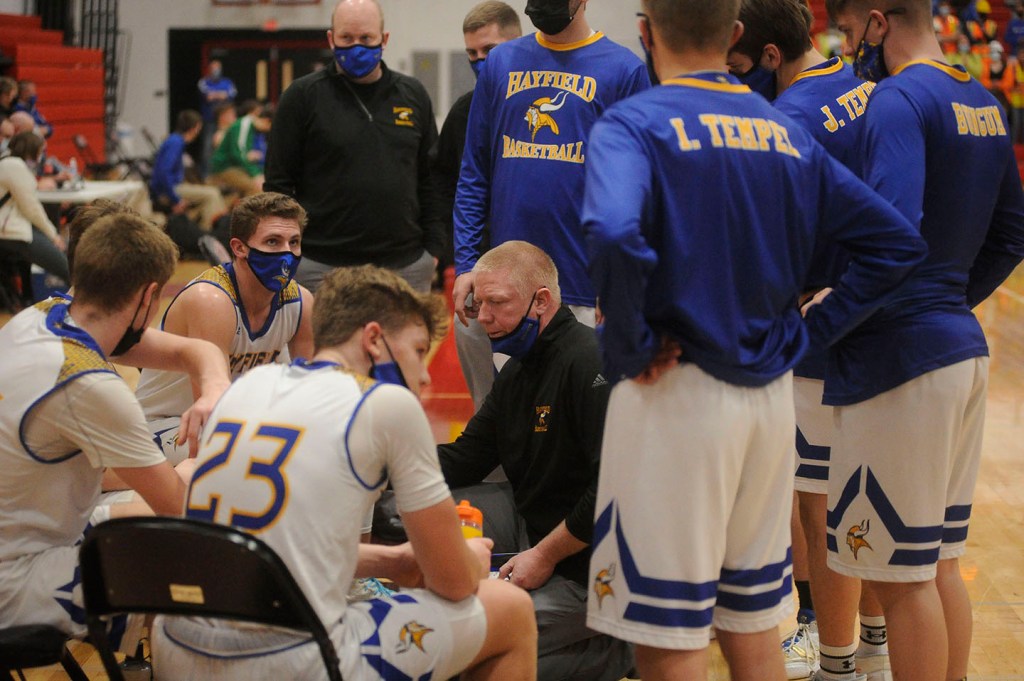 The Hayfield boys basketball team huddles in Rochester John Marshall in the Section 1A semfiinals Monday night. The Vikings clinched their first trip to state since 2013 on Wednesday. Rocky Hulne/sports@austindailyherald.com

Hayfield senior Ethan Slaathaug made sure he wasn’t going to be disappointed two years in a row.

One year after the Vikings lost to Blooming Prairie in the Section 1A title game, Slaathaug poured in 40 points as the Vikings took down No. 3 Southland 78-72 to clinch a state berth in Rochester Mayo Wednesday.

“My teammates were getting me open. They fed off of me and I fed off of them. I’ve got to give it all to my teammates,” Slaathaug said. “It’s a little bit different this year, but we could feel the energy off of the fans in the gym. I’m happy to have this experience and it’s something we’ll always remember and take with us for the rest of our lives.”

While Hayfield head coach Chris Pack emphasizes a team approach, he was totally willing to pass the credit to Slaathaug for the shooting performance. 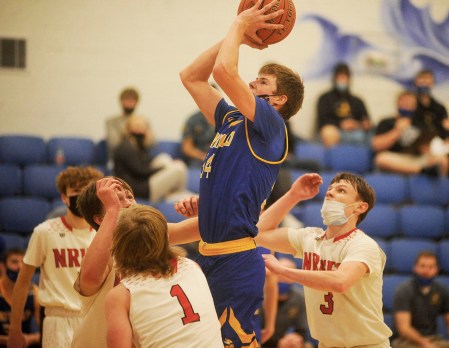 Hayfield’s Ethan Slaathaug fights up a shot amongst a crowd this season. Herald File Photo

“He made the shots, it’s mostly him,” Pack said of Slaathaug.

The Rebels took a 37-35 lead into halftime after Ethan Forthun hit a half court shot and it was a close game down the final stretch. Forthun finished with 26 points and Harrison Hanna scored 26 as well for the Southland (18-3 overall), which is still searching for its first ever trip to state in boys basketball.

“It was a real special year,” Southland head coach Matt Weber said. “I told them before the game that nobody is going to lose tonight, because of what they’ve accomplished, they’ll never forget. This was a game that someone would love to watch and we left it all out there. It was a back and forth game. Ethan Slaathaug was unconscious for them.”

Pack said he had to get his team to regroup after the buzzer beater by Forthun and both teams continued to battle it out in the second half.

“It was two great teams with a punch and a counter punch,” Pack said. “The whole game was back and forth. Ethan Forthun played an amazing game and Harrison Hanna was unstoppable.”

Southland’s Ethan Forthun breaks for the basket during the first half against Schaeffer Academy. Herald File Photo