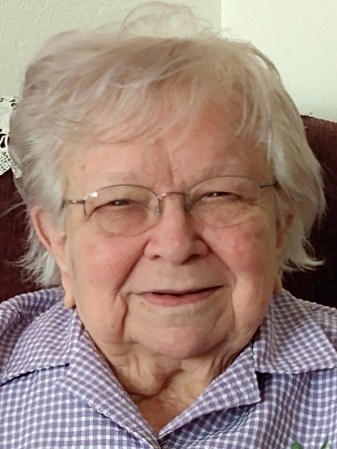 Rosemary was born on Dec. 20, 1924, in Blooming Prairie, Minnesota, the only child of Johnny and Rose (Erickson) Paulson. She grew up surrounded by much love and laughter with her six “sisters” (cousins) who lived nearby in Ellendale, MN. Her parents ran a grocery store where Rosemary learned the value of money and charity for those who needed a little help during tough times.

After graduating from Ellendale High School in 1943, Rosemary worked a variety of jobs from Jostens in Owatonna, MN, to Century Metalcraft in San Diego, CA, and as a secretary for the Air Force at the Pentagon in Washington, D.C. While in California, she met a handsome and jovial Marine from Texas named Carroll Ray. After finishing his two-year commitment as an embassy guard in Paris, France, the couple were married on June 30, 1954, settled in Austin, MN, and were blessed with two children.

Many good times were enjoyed at their cabin in Waterville and after retirement, at their condominium in St. Louis Park. There Rosemary and Carroll thoroughly enjoyed their King’s Folk church group, traveling, and volunteering at Methodist Hospital and local thrift stores. In their late eighties, they moved to Glen Oaks Apartments where they lived happily nestled in the great care of Sue Swanson (apt. manager), enjoyed watching nature and the frequent visits from family and friends.

Known for her generosity, quick wit, robust laugh, and upbeat personality, Rosemary will be remembered fondly as “such a dear” and so much fun to be around at any gathering. Like Carroll, Rosemary donated her body to the University of Minnesota Anatomy Bequest Program. A family service will be held at a later date with burial at Red Oak Grove Cemetery near Austin, Minnesota.