PROGRESS 2021: Working together with Austin 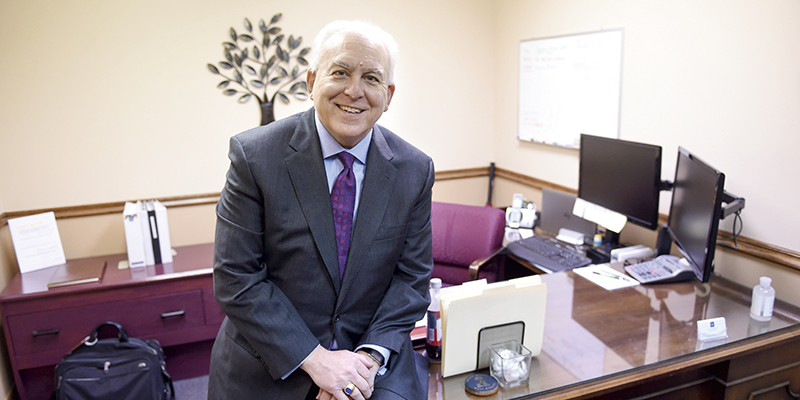 Steve Barrett interrupted his retirement to take over the reigns of the Austin Area Foundation. Eric Johnson/photodesk@austindailyherald.com

Austin’s new AAF executive director is about building through collaboration

Steve Barrett is supposed to be retired.

And yet, he’s currently heading the Austin Area Foundation, which seeks to build community support through charitable giving. Not only is he supposed to be retired, but he and the AAF are hitting their strides together, seeking to grow the reach of the AAF and strengthen ties within the community.

Barrett is a journeyman of sorts, returning home to a community he didn’t think he would see again. He moved to Austin with this family in 1952, spending time in the years to come in Chicago, Oklahoma, Kansas, Ohio and Texas.

And yet, the moving ultimately brought him back to Austin.

“Six year ago I decided to retire and when I looked around as to where I wanted to be, it came down to a choice of moving close to some family members in Florida or moving back to my hometown,” Barrett said. “I chose to move back to Austin, thinking this would be my retirement.”

Throughout his life, Barrett has had a background in fundraising and charities. For a time, he had a business that organized golf games for charity, starting when a youth group within his church needed to raise money.

The success established a foundation.

“I love golf. I’m not a great golfer, but I loved the game,” Barrett said. “I was able to put together a committee that had a whole lot of experienced people who had direct experience in the golf industry. We were very successful with that tournament. My friend said, ‘Hey, you ought to do more of this.’”

Barrett’s tournaments and fundraisers raised nearly $3 million and served as a conduit to getting money to the charities who needed it.

“Golf is such a special game,” Barrett said. “When you can put together a tournament that is doing good for somebody, it’s a nice way to make the money.”

He continued with that business while serving on a variety of boards  and some arts organizations.

With that background well established, Barrett found himself intrigued by the position with the AAF when it opened, despite being firmly entrenched in retirement.

“The idea worked for a few months until the position here became available,” Barrett said. “I have a strong back background in fundraising. That was something that just felt like a really good match. The Board of Trustees agreed.”

Barrett started on June 1 and hit the ground running.

Despite a year interrupted by COVID-19 in 2020, the AAF still was able to have a good year as far as fundraising was concentrated. Barrett said  that the AAF was up 40 percent in the foundation’s annual appeal.

At the same time, those within the AAF quickly realized the strain it was putting on the community. It was determined to take a more personal approach by doing the little things, like sending out flyers that were individually addressed that had some sort of personalized impact.

Over the years, the AAF and the grants it administers to community organizations has become a major component of the success these groups are able to have year after year.

“We’re really focused this year on programs that were addressing basic needs,” Barrett said. “We recently gave both a grant and some additional money through our basic needs fund to the Salvation Army for the food shelf.”

While Barrett and the AAF are committed to continuing to help Austin organizations, they also see room for growth in the near and far future. That success will depend on cooperation between organizations.

These partnerships can enjoy a symbiotic relationship that benefits all.

“One of the examples we use is that we talked about the relationship with the United Way of Mower County and what we liked to say is that the United Way is the checking account because the money that comes into the United way every year is generally distributed that same year,” Barrett said. “They don’t try to build up a large pool of money. That’s kind of our role. We’re the savings account of charitable giving.”

Another relationship Barrett pointed out was, of course, The Hormel Foundation.

“The other thing that we’re fortunate here to have is The Hormel Foundation has just been an incredible gift to this community,” he said.

But with most things, there is room to grow and Barrett has noticed that with the AAF, with a hope that he can hopefully be a part of that.

That starts with a need to grow assets. Barrett’s position is funded as a part-time position, but in the future Barrett foresees a need for a full-time executive director.

“I think this community has the resources that we can grow significantly,” Barrett said.

For some of the plans currently in motion, the growth will become pivotal, especially with an expansion into county-wide services.

Currently, the Austin Endowment Fund is the catalyst for getting grants to the public and it makes sense to keep that focused on Austin given the AAF is based here in Austin. However, the AAF is also working on establishing an endowment for the county, which would be called the Greater Austin Area and Mower County Endowment Fund.

“We are the Austin Area Foundation and so there are a number of worthy causes that are based outside of the Austin City Limits,” Barrett explained. “We want a vehicle to be able to support those organizations and that’s something our endowment fund will be able to address.”

Another program that the AAF is developing is something called Keep Mower in Mower, based on a program Barrett saw in Kansas that would ask people to consider giving a certain percentage of their estate to the AAF to be put toward charitable giving.

“That’s one of the ways community foundations have traditionally grown significantly,” Barrett said. “Through planned gifts, through wills and estates, often time are talking about significant amounts of money and so that’s something that I’m hoping that by the time I retire this position, we would have gone past the $5 million mark.”

Whatever happens, Barrett hopes that when he does  commit fully to retirement that he has left the AAF in a good position.

“If I feel good and I’m getting the job done, then I would love to continue because the best part of this position is being able to meet the people of Austin and surrounding areas,” Barrett said. “Get to know them and work with them to figure out how we can work together to meet their objectives in terms of charitable giving.”