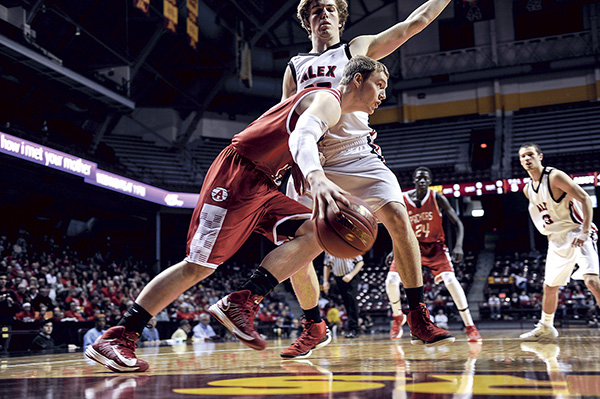 Austin's Zach Wessels drives against Alexandria's John Vogeler during the first half in the quarterfinals of the Class AAA Minnesota State Boys Basketball Tournament in Williams Arena in 2014. Herald file photo

While a moment may last only a few seconds, its effects can last for much longer. 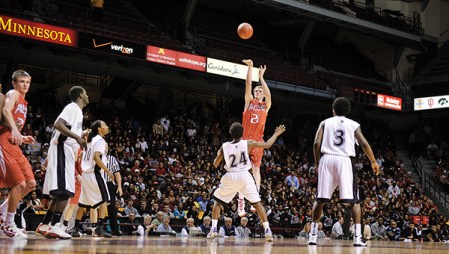 Austin’s Joe Aase shoots a three in the second half of their Class AAA Boys’ State Tournament first-round game against St. Paul Johnson in 2012. Even though they lost, it marked the beginning of a string of state tournament appearances for the Packers. Herald file photo

That’s exactly what happened with the Packer boys basketball program, which has been one of the best in the state for the past decade ever since it broke through in fantastic fashion. Tom Aase helped make school history when he came lumbering down the baseline to catch an alley-oop from Zach Wessels and throw it down for a dunk that sent the Packer boys basketball team to state in 2012. That buzzer beating slam dunk broke a 30-year state tournament drought for the Packers and it had a massive effect on the future of the program.

The Packers have now played in six of the past nine state tournaments and the community has seen basketball become the main event on Friday nights in the winter. Austin head coach Kris Fadness has led the turnaround, but he’s had a lot of help from the players, parents and community over the years. 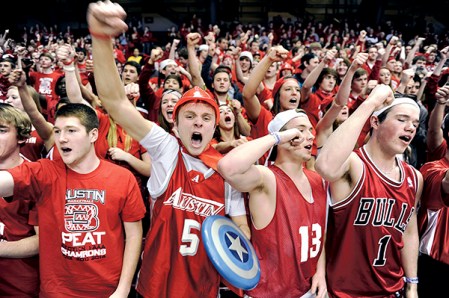 Austin fans get rowdy before the start of the Class AAA quarterfinal game in 2014. Herald file photo

Fadness credits the parent group from 2009, which included the Justices, Rizzis, Feltens and Gundersons, for getting the ball rolling when they came up with the idea of the Austin Fast Break Club.

“The Fast Break Club has done wonders for our program, in terms of being a revenue source and being a supporter of our basketball game. That’s been critical,” Fadness said. “We’ve also had good players and you’ve gotta have good players.”

Austin assistant boys basketball coach Jamaal Gibson graduated in 2010 and he was playing for the Packers right when things started to pick up. He has recollections of struggling to find enough people to play in open gyms and guaranteed varsity spots for many kids who played basketball in middle school.

Those days are long gone.

“When I was in middle school, the varsity guys weren’t as talented. Our team was a little more solid, but it wasn’t anything like it is now,” Gibson said. “We knew we were getting the coaching that we needed and we knew the program was eventually going to take off.”

Gibson also runs the twitter account for the Packers, where he posts in-game highlights and gives players recognition on social media. He is one of three Austin assistants, along with Joe Kroc and Emmanuel Younis.

Having a staff that is on the same page has created a basketball factory in Austin that gets kids in the gym and sets a high standard for what it takes to be a varsity player.

“That first state tournament in 2012 brought excitement to basketball and I don’t think that ever left,” Kroc said. “I think the stability of what Fads does in the summer and what we do with AYB is unique to what we hear from other coaches in different communities. We have stability to give them an outlet and have them staying involved as youths. We have a pretty good system going up from fourth grade all the way to high school.” 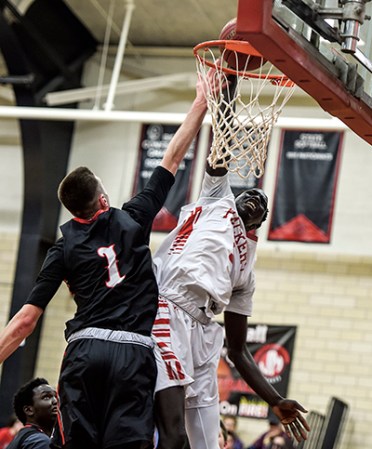 Austin’s Duoth Gach goes head on against Rochester John Marshall’s Matthew Hurt in the first half in 2018. Herald file photo

Youth basketball is often a time when a program spurs the interest of a future player or chases them away. Austin Youth Basketball ensures playing time for all kids at a young age and it does everything in its power to not deny a kid a chance to play due to financial reasons.

Community members in Austin have also made a big difference for some kids who may have struggled with transportation, food and supply costs for playing basketball. Fadness is hoping Austin can keep that support going, but he’s seen a drop off in participation rates in some of the younger grade levels in recent years.

“Things are changing. Quite frankly, we’re not finding the same numbers that we had five or six years ago. I don’t think the pandemic is helping at all. We’re not getting as many kids that we want at summer camp. I’m very concerned about the future of our program five or six years down the road,” Fadness said. “Can we have parents who keep helping kids from socioeconomic status who don’t have the means of transportation and money to be involved? Some of our parents have been phenomenal. When you look at what the Hebrinks, Owens and Brehmers did, we’ve had some parents who have gone above and beyond to help kids out. They’ve made a difference in the lives of these kids and hopefully someday those kids will realize that.”

The first group to take things to the next level on the court included Joe Aase, who’s dad Lee was on the 1982 state qualifying team, Tom Aase and Wessels. Fadness said that team, and the teams that have come since, have had that special drive to improve and compete on a daily basis.

“We’ve had really competitive kids who understood that winning is the most important thing,” Fadness said. “You have a kid like Zach Wessels who all you had to do in practice was to turn on the scoreboard. You start keeping score and Zach would turn it on. He was competitive all the time and I think Tom Aase was the same way.” 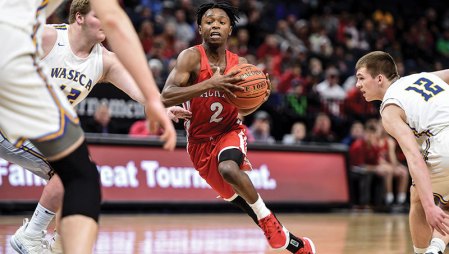 LaHenry Gills drives off the point against Waseca in the first half during the Minnesota Class AAA State Boys Basketball Tournament semifinals at Target Center in 2019. Herald file photo

In recent years, the Packers have had a much more diverse look to them. Both Gach, who now plays at the University of Minnesota, played a huge role, along with his older brother Gach Gach and twin brother Duoth Gach. Agwa Nywesh carried the 2019-2020 team with leadership on and off the court and Emmanuel Manyuon, Okey Okey and Teyghan Hovland are all key players on this year’s team.

“We’ve had great community support and I think our youth kids saw that and they wanted to be part of a winning team. We also had the South Sudanese influx that has really benefited our program, there’s no question about it,” Fadness said. “Those kids saw us winning and they saw us getting attention. They were all playing at the Y and that took us to a different level. They’ve been leaders for other young South Sudanese kids coming through. It’s been a nice cycle.”

The Packers were set to play for a trip to their third straight trip to state last year when the COVID-19 pandemic caused the Section 1A title game between Austin and Albert Lea to be cancelled.

Austin has played in 32 state tournaments in school history. The Packers first appearance in the state tournament came in 1916 and Austin won state championships in 1939, 1946 and 1958. 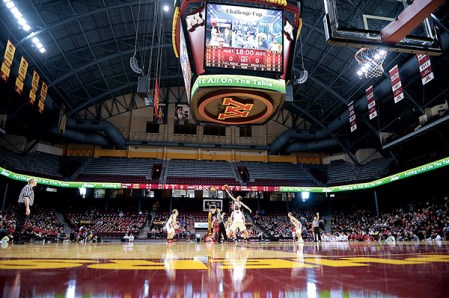 With great success comes a giant spotlight on the Packer basketball program, and many in the area have come to expect greatness from a public school team in an outstate area that does not have the ability to recruit or make trades.

“This year is so different with no fans at the games, people just expect us to win,” Fadness said. “Last year we lost five games total. All were close games and all were games where we had a lead in at some point in the second half. After those losses people were like ‘what happened?’ We’re not going to win every game. Other teams work hard too and have good players. I think we put more pressure on ourselves than people outside of us do.