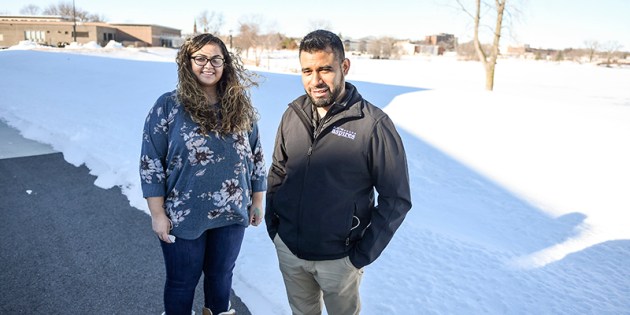 Teresa Lugo and Jesus Alvarez are two of six navigators who help guide Hispanic males through to graduation. Johnson/photodesk@austindailyherald.com 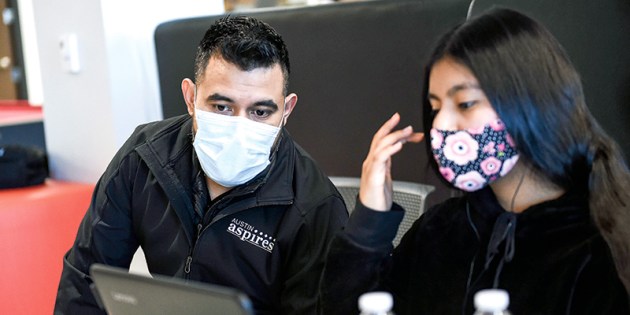 “Both Teresa and Jesus have incredible relationships with not only the students, but the families as well. In some cases, students were referring families and students to us. In other cases, it’s families coming to us.” — Jayne Gibson, executive director of Austin Aspires 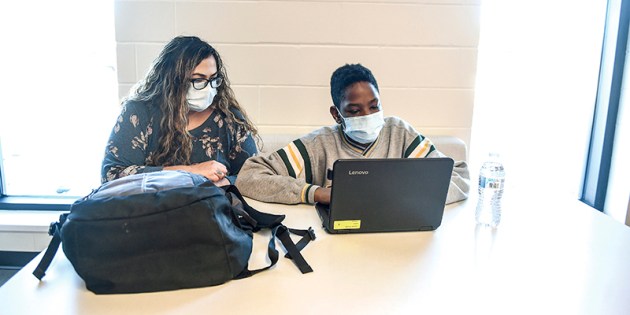 Navigators like Teresa Lugo work closely with students when tutoring. This carries over to her role a navigator, which was created through Austin Aspires. Eric Johnson/photodesk@austindailyherald.com

Education is often a long process of fitting the tools to the students, and sometimes those students need a little bit more work.

To find the right fit in some cases, school districts turn to the numbers and dig through the data to find those areas in need of improvement

In a startling turn of events, a collaborative effort in Austin between Austin Aspires and Austin Public Schools turned those numbers on their head to ensure Hispanic boys in the Austin district graduated in higher numbers.

A program through Austin Aspires created positions called navigators who worked not only with students, but with their families to find the route to graduation that might otherwise be missed.

To understand what the numbers meant, however, you have to understand the problem. Hispanic boys in the district were graduating at a substantially lower rate than other designations of students within the district. Only about 30 percent of Hispanic males were walking through graduation each year.

This issue was discovered as a group from AHS, Pacelli Catholic Schools and Jayne Gibson — executive director of Austin Aspires — were preparing to participate in an equity conference in Chicago last year.

“We were sitting around the table at the district office, drilling down in the data … that’s when we really noticed the high school grad rate was 70 some percent,” Gibson said. “When you started to desegregate that down and looked at the high school male grad rate, it was 36 percent. It was a significant rate.”

It created one significant question.

“What is going on here?” Gibson asked. “We looked at some trend data. The trend was there. That really got us thinking. Why?”

What Austin Aspires and the district discovered was there were a few different areas that could be pointed at.

In some cases it was the content being presented in school and in other cases it was simply a decision to work rather than study, a combination of wanting to be able to afford the things they have and a resignation that they would be working anyway.

“Might as well start now,” Gibson said. “There’s just as many reasons in the story. That’s when we realized it can’t just be the schools.”

However, the district had to take a careful approach to the problem. Was it just a matter of numbers versus other groups that were skewing the data?

“It was a very discrepant result,” Alberts said. “That being said, we also know the one caution when we’re talking about very specific groups: is the smaller number of students having a higher impact?”

In the past, success coaches within the schools have been bridging gaps for students of diversity and by all accounts have been doing a good job.

But it was reasoned that in the case of Hispanic males, more may need to be done.

“This is not saying our school success coaches aren’t successful,” Alberts cautioned. “It recognizes that some students needed more.”

The effort established amazing results, in just one short year. This past school year, 2019-2020, the percentage of Hispanic males graduating, skyrocketing from the 30 percentile range to 87 percent.

How did it work so well? In one word -— navigators.

In 2019, Austin Aspires and seven other organizations doing similar work were included in Gov. Tim Walz’s budget. Austin Aspires in turn used some of those dollars to create navigators for the sole purpose of working with students and families to get diplomas in the hands of Hispanic students.

The key was building relationships. Gibson used Teresa Lugo and Jesus Alvarez as prime examples of what the navigators were capable of.

“Both Teresa and Jesus have incredible relationships with not only the students, but the families as well,” Gibson said. “In some cases students were referring families and students to us. In other cases, it’s families coming to us.”

Lugo in particular had a very good reason to want to help these students — she was once in their shoes.

“I’ve always had an interest in working with students and helping them be successful,” she said. “I was once a high school dropout back in 2006. It took me a year to go back and graduate.”

Alvarez had lost his job when he saw an opportunity to give back.

“I was looking for a job and was like, ‘I would like to give it a try,’” he said. “I like to help people. I got the job and started working with the kids.”

With the navigators implemented, they were able to help and get in on a very personal level. It became more than just simply finding a way to educate the students.

Either way, they have found success.

“It’s a combination of a lot of things,” Alberts said. “Sometimes it takes working with the families and getting over there and knocking on the door.”

The navigators are very hands-on when it comes to guiding students. They keep track of grades, among so many other things in the day-to-day life of the student.

They help guide them to tutors and community resources.

But a major part of this is getting the parents involved in a way so they understand where their child is currently at while at school. Many of the resources used to track their child’s progress is lost on them because they just aren’t sure where to go.

“They didn’t have this help in the past,” Alvarez said. “They don’t know what to do. We’ve been helping families setting up where parents can check grades and assignments. We’ve been helping with the school registration and transportation. We help with a lot of things parents need.”

Whatever the case, the navigators themselves have seen the improvement both with the parents and students. One case in particular has been close to Lugo’s heart.

“It makes me feel like a proud parent. They are like my adopted kids,” she said. “I’m working with a student that recently dropped out and has re-registered. He was very thankful.”

In some instances, the entire process may come down to simply being supportive.

“There’s always going to be a challenge and maybe sometimes it’s hard for students to say, ‘I can’t do this anymore. I give up,’” Alvarez said. “If they know we are there to help them, maybe we can get to students so they can be successful.”

The end result, the future

There’s every reason in the world to tout the success of what navigators have been able to do. To turn a trend around that quickly and drastically is a huge reward at the end of the day.

But along with this success comes caution.

“We celebrate when we can and make sure we point to success,” Alberts said. “We want to make sure this is sustainable. That requires minding that continually. There’s always the notion of making sure we know where those needs show up.”

Regardless of what happens next, both Austin Aspires and APS know this works and there is a hope that momentum can continue forward so these students can graduate.

“We could feel it,” Gibson said. “It felt like we were doing the right thing. It was validating the numbers.” 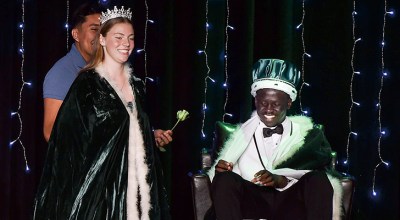