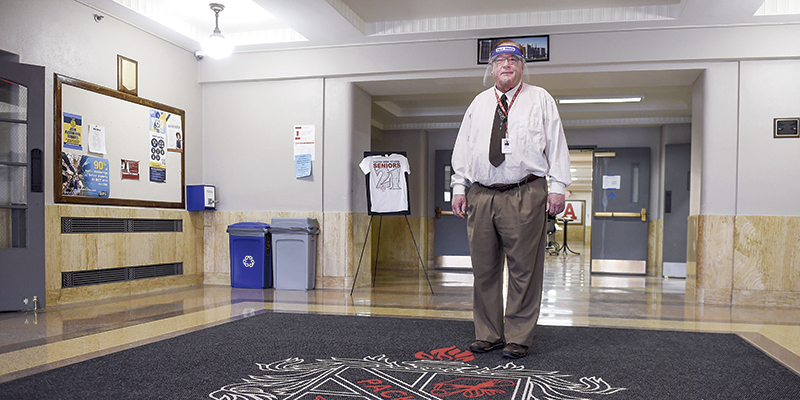 For 12 years, David Krenz has been superintendent for Austin Public Schools. In June he will retire. Eric Johnson/photodesk@austindailyherald.com

If you’ve been to any Austin Public Schools events over the past 12 years, you’ve no doubt seen your superintendent in the crowd, taking in whatever it may be.

Football, choralaires, spelling bees — David Krenz has likely been there watching the district as it runs.

However, when the school year comes to an end in June, so will Krenz’s career as he retires, having guided the district for over 10 years. It’s the last stop for an educator who has worked at all levels of education from teacher to coach and superintendent. 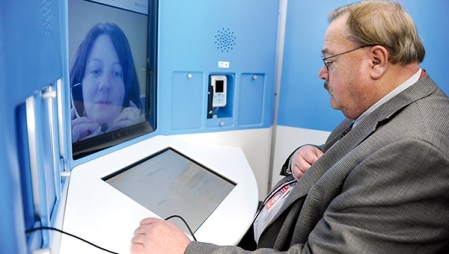 We had great people in place. The community was really supportive. It was a matter of how we can bring everybody together to help things move forward. ” — Superintendent David Krenz

“It’s been an exceptional 12 years in my mind,” Krenz said from his office at Austin High School. “I thought the last district I was in, was probably the last district I would retire in and then I got a call to check Austin out, to talk to some people and see how I felt.”

Krenz came from La Crescent, Minnesota, intrigued by the larger district and the resources available. Along with that came a progressive spirit to the school that would include the building of I.J. Holton Intermediate School and furthering STEM Education. Both of these examples advanced education methods in Austin along those progressive notes.

“I really wanted to take that opportunity,” Krenz said. “I was lucky enough to be given an opportunity to use the resources Austin brings to bear.”

Krenz started teaching in Byron before taking a stint in the private sector. It wasn’t long though, and Krenz was back in a classroom and on the sidelines at Fountain City, Wisconsin.

Between then and now, he saw see time in Winona, Wausau, Wisconsin, Wabasha-Kellogg and Le Crescent.

At the very beginning of his time in Austin, David Krenz sought to create a district that worked in collaboration with staff and the community. Eric Johnson/photodesk@austindailyherald.com

During that journey, Krenz pointed to Wausau as being similar to Austin in many ways -— a larger district with great community support. While in Wausau, Krenz served as assistant principal, which led into a district position.

It was the strong community aspect that really spoke to Krenz in his move to Austin; a desire to make a difference, along with a community willing to go with the tide.

“It’s one of those things, if you want to make change you have to find places with resources and the community is willing to move along with those changes,” Krenz said. “That’s something I saw here in Austin. We had great people in place. The community was really supportive. It was a matter of how we can bring everybody together to help things move forward.”

That was a challenge right out of the gates for Krenz, who started in 2009.

He was coming in behind a strained relationship between administration and the school board, especially between then superintendent Candace Raskin and school board member Curt Rude. On election night in 2007, the two got into a heated exchange and two years later, Rude filed a lawsuit alleging defamation, negligent infliction of emotional distress, intentional infliction of emotional distress, vicarious liability, negligent supervision and negligent retention. 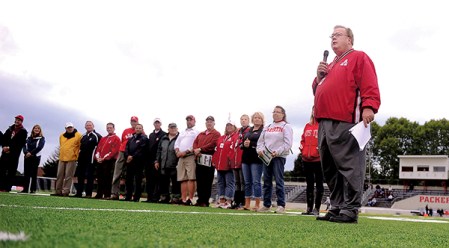 “Could the district still educate their kids
and do a good job? Absolutely, and to me that’s the perfect sign of how you’ve left the district.” ­— David Krenz

Raskin had filed a complaint of her own with the Austin Police Department, saying Rude was intimidating, threatening and abused his position as a police officer.

Healing that rift was something Krenz set about fixing immediately upon starting his tenure in 2009.

“Immediately when I got there, there had been some controversy between administration and amongst the board members,” Krenz said. “Just try and bring people together.”

“I took the time to get to know the board members and work with them,” he continued. “They all wanted the same thing. There really wasn’t anything centered around what they wanted for the schools or what the schools wanted for support.”

Through working together at all levels, the district began working as one, which is something Krenz set as a goal early on. It wasn’t about one or two people educating a population or running a district; Krenz wanted to see input coming from all directions.

“The biggest thing is right away getting on board and having people begin to understand that I was a collaborative leader,” Krenz said. “I wanted people to make decisions. I wanted to provide them opportunities to use their skills. That took time. They didn’t feel that way previously. Folks felt they didn’t have the autonomy to do some of those things and that’s critical.”

During Krenz’s time in Austin, the district began to take novel approaches to educating the students under the roof of APS’ schools. There will always be standards from state and federal levels schools will have to follow, but the district began looking at ways to reach students on an individual level. To be specific: personalize the education; reach the students on their level.

“If I had one thing in my career I’ve always wanted to accomplish, it’s to personalize and individualize instruction,” Krenz said. “That’s the way we’re going to change education. We’ve got to get away from the deficit model. Accentuate the things they are good at and build on those and fill in where needed. Engage kids with what they are good at and they will bring their lack of abilities up to make sure they are doing what they like to do.”

That has spilled over into extra curricular activities as well. Over the years, the district has made a special point of putting equal emphasis on music and arts, as well as athletics, and make sure there is equal opportunity across the board.

“I think that’s critical,” Krenz said. “It looks at the student strengths and goes back to a belief system. We have to build those strengths. If a student is strong in music, engage them there and work on the classroom side of it to keep them engaged all along.”

It could also be argued that philosophy has been attributed to the staff at APS. Krenz has advocated for ensuring that staff throughout the district and their many departments have the opportunity to ascend the ladder of success.

APS has been able to establish a strong tradition of promoting from within, something Krenz believes just makes sense.

“You have to do that with staff,” Krenz said. “There’s a high level of trust in our administration, but also trust on the faculty part and the staff part that they may try something and it may not work, but we’re not going to come down on them.”

“It’s important both ways that we trust they are doing the right thing and they trust we are going to allow that to happen,” he added

Throughout the district, Krenz felt it was important that those showing the drive be rewarded for taking initiative.

“I’ve tried to create the environment here with staff, teachers, custodians, whatever,” Krenz said. “You build from within. We have to give you the ability to make decisions, to show what your qualities are and lift you up to make that happen.”

As Krenz looks back on his 12 years, there’s plenty more to touch on, such as providing opportunity and meeting the challenges of such a diverse population and the COVID-19 pandemic and how  the district continues meeting the needs of education.

And there’s plenty more to do, but Krenz feels good that he is leaving education at the right time and that there is one thing that supports this the most.

“The key element, if I walked away and nobody filled it, could keep the people moving forward,” Krenz said. “Could the district still educate their kids and do a good job? Absolutely, and to me that’s the perfect sign of how you’ve left the district.”