PROGRESS 2021: A calm mindset through the storm 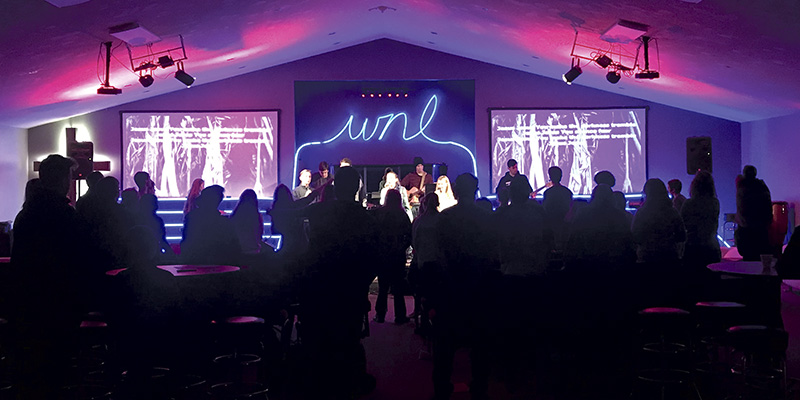 Youth at Faith Free Church come together for music and fellowship. Photo provided

Youth find community and hope in the church during a pandemic

When COVID-19 shut down schools, sports and restaurants last spring and this winter, area students were left bewildered, lonesome and frustrated. But for those who attended church, there was still a place to go to find the boost they needed.

While churches were forced to teach classes virtually last year, the summer allowed outdoor classes and the fall and winter have brought indoor classes with masks and distancing.

Scott Owens, Pastor of Students and Leadership Development at Faith Church Austin, said the youth groups have served to keep kids going strong in a time when they could easily slip into mental fatigue.

“Right now kids need a lot of cheerleaders to keep going. It would be really easy for them to stop trying, but we’re trying to encourage them as much as possible,” Owens said. “The fact that kids are getting through this is a huge credit to them.”

Faith Church Austin has opened its doors for kids to bring their schoolwork or use the internet in a supportive environment if they choose to do so. Owens said it has been a big step just to get kids in the building and offer them a place to talk about whatever it is that’s been troubling them during the pandemic.

Kids at St. Olaf Lutheran Church got into the Halloween spirit this past year.

“We felt being here was important for the kids’ mental state, their spiritual well being and their overall well being,” Owens said. “ We’re giving them the chance to socialize and we’re asking them how its going. A lot of kids are struggling. We want to encourage them.”

Owens said the Zoom calls and Facebook Live calls last spring may have allowed classes to continue, but they didn’t replace meeting in person.

“It was good, but you could tell the longer and longer you did online stuff and zoom calls, kids were getting discouraged. You would see a joy in their face and then it would wither away,” Owens said. “You would see less and less faces and kids were distraught over not being able to meet.”

Brandon Harrison, the Student Ministries Pastor at Cornerstone Church, said that he’s been able to host in-person gatherings at Cornerstone about as often as public schools have had in-person learning. While it is crucial for young people to get together in a positive gathering during a time of shutdowns and quarantines, all churches had to be careful about how they went about their youth programs.

“It’s tricky, especially with students. We were all teenagers and we all know the invincibility they think they have. We have both sides,” Harrison said. “Some kids don’t want to wear a mask and some kids will wear one to honor their parents and us. You also have some that aren’t comfortable coming in yet and that creates a unique atmosphere.”

One of the biggest challenges for Harrison and other youth leaders is to impose optimism on kids who have already missed out on a prom, their favorite sport, or even the chance to go out and watch a movie. Things haven’t been normal for this generation in almost a year and it’s hard for them to see the light at the end of the tunnel.

“ From Chicago to California you hear about suicide rates that are increasing and mental health decline, especially in young people. Young people are facing isolation in a period of their lives when isolation is the last thing that they need. We’re seeing it too. I know it’s here and I get calls from parents from time to time about kids who are really struggling,” Harrison said. “I truly believe the church is built in such a way that we are uniquely qualified to offer that full life that Jesus Christ promises to people in our community. Them coming here is a band-aid, because I don’t feel like we’re fully able to function like we used to, but there is a level of hope here and they still want to be here and connect.”

Lyn Meany was hired as Director of Children, Youth and Family Ministries at St. Olaf Lutheran Church just two weeks before the pandemic, which meant she didn’t see a lot of the kids’ faces in person for nearly six months. When she finally did get her group of middle school and high school youth groups together, she asked what they wanted to do for fun.

One student mentioned that they used to play hide and seek in the church when they were little and Meany smiled at the long forgotten sound of laughter that echoed in the hallways of the church.

“I’ve gotten to make some connections with them. The kids are very fascinating to visit with and they want to do fun things,” Meany said. “We’re not just sitting and looking at each other. We’re doing something fun and we’re talking about life experiences and how to adapt. It’s a growing movement for the kids.”

St. Olaf youth groups have focused on serving others and that has included dropping pumpkins with encouraging notes on doorsteps, making hats for community members, and even starting a pen pal program with those who cannot attend church.

Rev. Madison Chelberg, Pastor of Faith Formation at St. Olaf said that the kids have wanted to be back in church, as some of them don’t get to see their friends during the week –— due to hybrid and distance learning.

“We are instilling the mantra of service for our neighbors,” Chelberg said. “Lyn has found really good ways to incorporate service contracts. It’s good for the kids because they need service hours for the Austin Aspires scholarship. They’re excited about service and they’re excited about being with their friends.”