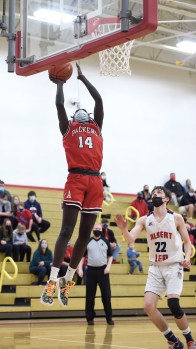 Austin’s Dieth Duoth with a bucket late in the first half against Albert Lea in an opening round game of the Section 1AAA Tournament Wednesday night in Packer Gym. Eric Johnson/photodesk@austindailyherald.com 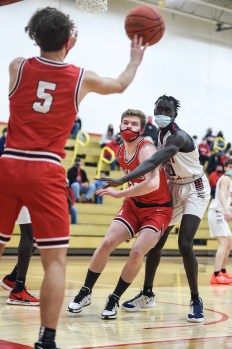 Austin’s Kaden Murley tries to push into position to receive an in-bound pass from Casey Berg during the first half against Albert Lea in the Section 1AAA Tournament Wednesday night in Packer Gym. Eric Johnson/photodesk@austindailyherald.com 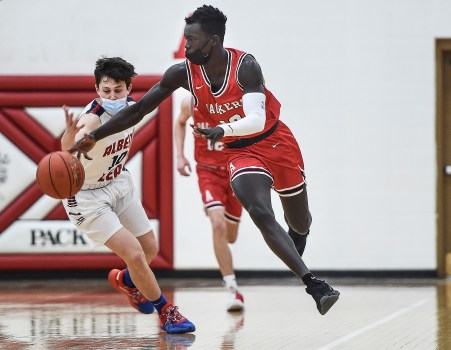 Austin’s Emmanuel Manyuon tries to pull in a loose ball after a steal during the first half against Albert Lea in a first-round game in the Section 1A Tournament Wednesday night in Albert Lea. Eric Johnson/photodesk@austindailyherald.com 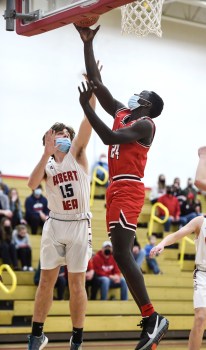 Austin’s Victor Idris with a reverse lay-up against Albert Lea in the first round of the Section 1AAA Tournament Wednesday night in Packer Gym. Eric Johnson/photodesk@austindailyherald.com 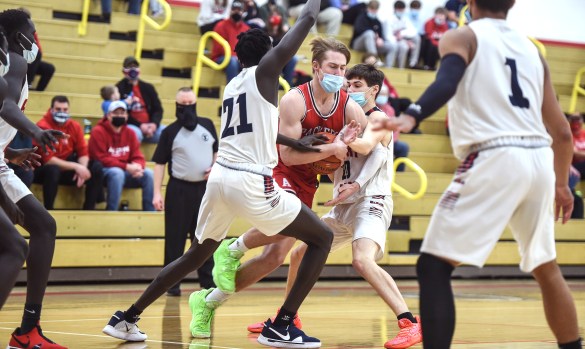 Austin’s Teyghan Hovland tries to battle through the Albert Lea defense during the first half Wednesday night in a Section 1AAA Tournament first-round game in Packer Gym. Eric Johnson/photodesk@austindailyherald.com

The Austin boys basketball team is still a little short on the bench, but it didn’t matter as they ousted No. 8 seeded Albert Lea (0-19 overall) 72-26 in a Section 1AAA quarterfinal in Packer Gym Wednesday.

Austin opened the game on a 12-1 run, but the Tigers crept to within 20-9 with nine minutes left in the frame. The Packers put together another 11-2 burst to go up 31-11 and the game was lop-sided the rest of the way.

Austin senior Okey Okey scored 20 points as he went 6-for-12 on threes and grabbed three rebounds. Okey said the Packers (16-2 overall) had to come out with a playoff intensity, even though the Tigers hadn’t won a game all year.

“It doesn’t matter who we’re playing. We’re going to come into the game with focus and energy to come out and win,” Okey said. “I feel like if I get my shot rolling right now and I’m on, we’ll be a lot better. If we’re all shooting better, we’ll have that confidence.”

Eight of the nine players who played for Austin scored and the Packers have now won 11 straight games.

“I’m happy we won and nobody got hurt,” Austin head coach Kris Fadness said. “We got through it and hopefully nobody from Albert Lea has COVID or anything. We want to win, stay healthy and move on. The game itself probably wasn’t great for spectators and we lulled at times. But I’m just happy we got the win.”

Austin will host No. 5 Kasson-Mantorville (8-11 overall) in a Section 1AAA semifinal at 7 p.m. Saturday. If the Packers win, they will host the Section 1AAA title game at 7 p.m. on March 25.

While Packer Gym won’t be packed with fans, Okey and his teammates will embrace the chance to play the section tournament out on their home floor.

“Without the crowd it’s a bummer, but I’m just glad we get a chance to play,” Okey said. “Last year got cut short because of COVID and we hope we can continue to keep playing. Seeing what happened last year, I felt really bad for what happened to the seniors. Hopefully that doesn’t happen to us.”