Our Opinion: A need to support the Asian American community 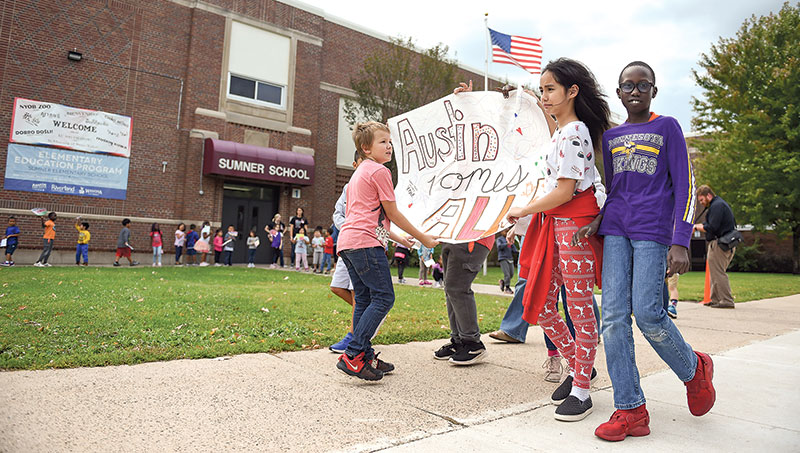 Sumner Elementary students carry a banner, welcoming all to Austin as the school took part in a flag walk, a part of Welcome Week activities in 2019. Austin continues to be a community of welcome to people from all countries and can be a model for other communities. Herald file photo

Like many people on Wednesday, we were shocked and horrified by the shooting in Georgia that claimed the lives of eight people — six of which were Asian women.

While early reports included concerns this was a racially-motivated attack, it later came out there was likely another reason for the killing, possibly tied to the defendant’s claims of trying to avoid complications from a sexual addiction.

That excuse aside, it can’t take away from the fact that as of late Asian Americans have seen a spike in violence against them as people link Asian Americans to the rise of COVID-19.

It’s an asinine jump in logic to assume that simply because a person is of Asian descent that they are automatically linked to a pandemic that has killed over 2.6 million people worldwide and nearly 550,000 in the United States.

While we haven’t heard of violence against Asian Americans in Austin, we believe in reminding people that there is no place for violence of any kind against people in Austin or anywhere.

History is frequented with the denigration of people that some consider inferior in some way or are beneath them. We can point specific fingers to the slave traders of the new world or the rise of Nazis in Germany, who believed that certain races, as well as certain religious groups, were at best subservient and at worst people that should be wiped from the face of the planet.

Over the years, our community of Austin has become a welcoming community, and among the many peoples that make up Austin, Asian Americans have contributed in many ways to the betterment of our community. We have Asian businesses, scientists at The Hormel Institute and educators in our schools.

Like other groups, Asian Americans play their part in making Austin special when it comes to inclusiveness.

However, in cities and communities throughout the United States, Asian Americans are under attack simply because of where they or their ancestors came from.

We are fortunate that we have not seen the level of hate displayed in other areas of the nation, but we can’t be so naive to think that it isn’t here in some form. Ideas can be poison, and the most poison of all are those of a racist nature.

According to the article, “There were 5,125 cases of racist, anti-Semitic, anti-LGBTQ and other hateful messages spread through physical flyers, stickers, banners and posters, according to Wednesday’s report. That’s nearly double the 2,724 instances reported in 2019.”

The report referenced was released Wednesday by the Anti-Defamation League. It went on to say that 2020 had the highest level of propaganda the ADL has seen in the last 10 years.

In a lot of ways, the way forward comes down to personal decisions we all can and must make. All we can do is continue to educate and continue to be welcoming in that effort of moving forward.