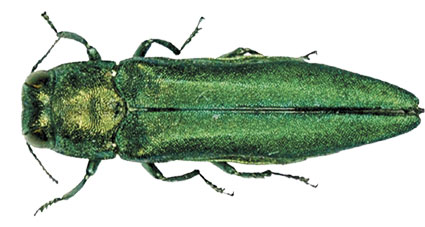 Mankato and North Mankato have been doing just that.

Mankato has estimated it has about 2,500 ash trees on city-owned land. North Mankato has counted about 1,650 ash trees on boulevards alone. Both cities have wisely been making financial preparations for what will be a years-long task of removing infected trees and planting new ones.

The Asian beetle was first discovered in Michigan in 2002 and is now confirmed in 35 states, including virtually every state east of the Rocky Mountains. The beetles boar just underneath the bark, starving the tree of nutrients and killing it.

While the closest identified infestation has been in Brown County, it’s almost certain that the emerald ash borer is very near or already in the Mankato area.

As Minnesota and area communities prepare for ash tree removal, they have the benefit of studying the experiences of states that have been dealing with it for years.

Locally, both cities will begin removing some ash trees from boulevards so as not to wait until there are so many infected trees that crews can’t keep up with removing dead trees before they become a hazard. And both are starting to budget for at least initial costs — pegged at about $825,000 in North Mankato and $1.5 million in Mankato.

Some states have turned to a tax credit (with the tax credit pegged at 50% of removal cost up to $300 per tree) that private property owners can apply to their taxes when they have to pay for ash tree removal.

Virtually all cities are requiring that infested trees on private property be removed, or the cities will do the removal and charge the owner. Cost of removing a large ash can be $1,000 or more.

Mankato is looking at a plan that would allow people who have the city remove several trees from their property make installment payments over several years or have the cost placed on their property tax bill.

And communities are looking at letting residents use the same tree removal service the municipality is using to gain them a lower cost for removal based on the price the city negotiated with the service.

Cities also need to continue planning for the proper disposal of ash trees, whether taken down on public or private property. State regulations have specific guidelines for handling dead ash so as to prevent more rapid spread of the borer.

Property owners who have an ash they don’t want to part with should also start investigating chemical treatment options — something that is effective in staving off the borer but is also expensive and must be repeated every few years.

And private property owners with ash trees should begin making a survey of other trees they have so when it comes to replacing their ash trees they do not plant too many of the same trees on their property. The future is likely to bring pests and diseases that will kill other types of trees.

Removal and replacement of the plentiful ash trees will be a financial burden for both taxpayers and property owners. Preparations now will lessen the burden.