Minnesota StarWatch: Leo the Lion roars to life in the spring skies 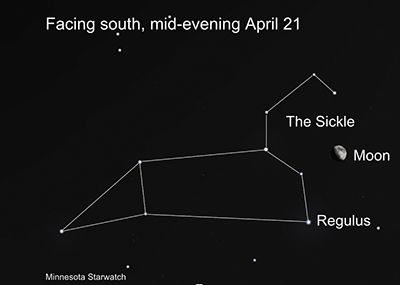 Spring is now in the sky as well as the air. And nothing’s springier than Leo, the lion.

In April Leo dominates the southern sky after nightfall. Look for the backward question mark of stars known as the Sickle, which outlines the lion’s head. The dot of the question mark is Regulus, Leo’s brightest star. To the east, a triangle of stars mark the hindquarters and tail. On the 21st, a waxing gibbous moon hovers near the Sickle.

The night of the 26th, a full “supermoon” crosses the sky behind Spica, the only bright star in Virgo, the maiden. Fullness comes at 10:33 p.m., less than three hours after moonrise. So this will be not only the second closest full moon of the year, but, as it clears the eastern horizon, one of the largest and roundest.

That night the moon forms a tall triangle with Spica and brilliant Arcturus, the jewel of kite-shaped Bootes, the herdsman. As dawn starts to break on the 27th, the triangle will have moved to the west. Also, its base will have broadened as a result of the moon’s motion eastward against the background of stars during the night.

In the morning sky, Saturn and Jupiter are now high enough above the southeastern horizon for easy viewing. Go out an hour before sunrise to see them against a dark sky. Jupiter is lower and brighter than Saturn, and no bright stars are close enough to be confused with them. As the days go by, both planets rise earlier, even as they move slowly and steadily apart. Their increasing separation is due to Jupiter’s faster motion eastward in its orbit.

Between the 1st and the 4th, a waning moon rolls through the stars of Scorpius and Sagittarius in the morning sky. On the 6th, a fat crescent rises below Saturn, and the next morning a slightly thinner moon rises below Jupiter.

The Lyrid meteor shower has a broad peak, spanning from the 16th to the 25th. It’s predicted to be strongest in the predawn hours of the 22nd, when it should sprinkle a dark sky with 10-15 meteors per hour. Meteors will radiate from high in the south-southeast, near the brilliant star Vega, in Lyra, the lyre.