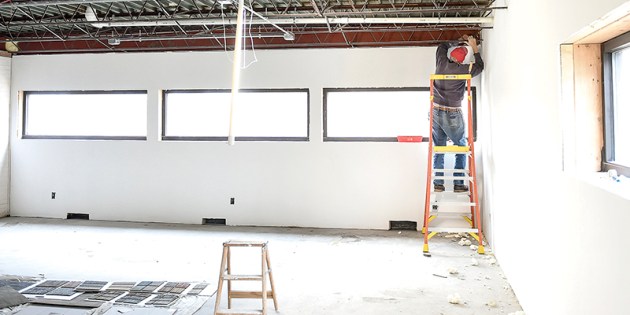 Tom Flynn works on one of the upstairs room at what will be the new Austin Youth for Christ location in Austin across from Austin High School. Eric Johnson/photodesk@austindailyherald.com 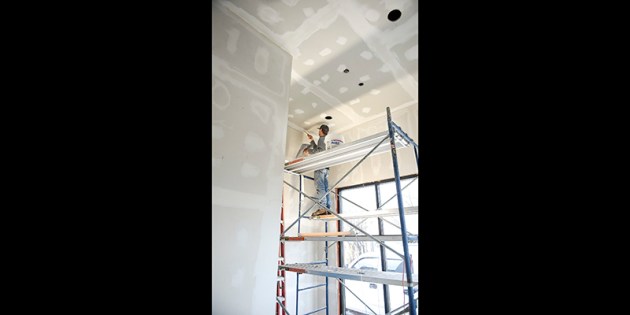 Jason Koehler works on the entry way of what will be the new location for Austin Youth for Christ. This entry way had to be added new to account for the need of an elevator. Eric Johnson/photodesk@austindailyherald.com 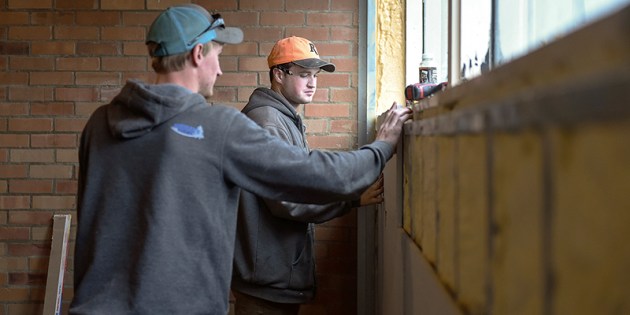 Samuel Parks and Aaron Koehler, left, apply sheetwall to a downstairs room during work to convert a professional building into the new location for Austin Youth for Christ. Eric Johnson/photodesk@austindailyherald.com 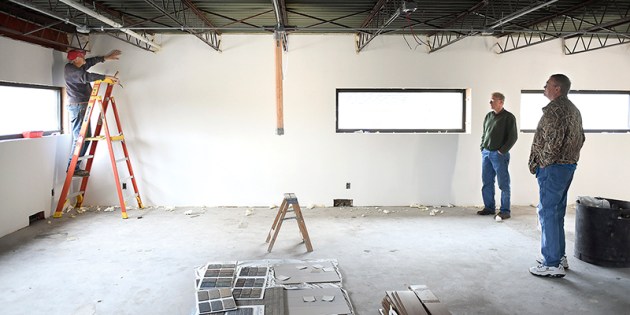 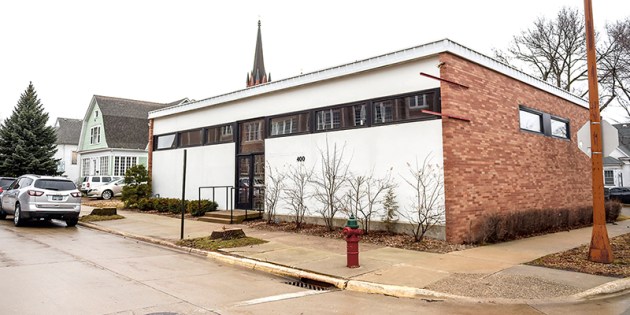 Youth in Austin will soon have another place to hang out when Austin Youth for Christ opens its new youth center in April.

The effort has been made possible through a collaborative effort by area churches and plenty of volunteer effort that converted the professional building at 400 Third Avenue Northwest into a multi-floored place for kids to meet and socialize in a safe environment.

“We will have a daily message centered around a Bible verse, we’ll have a pool table, foosball, booths and chairs and tables and a small kitchenette,” said. Austin Youth For Christ Director John Engelstad, who went on to say that there will be an area with a coffeehouse vibe and more room downstairs that will include a rec room.

“The main purpose of the space is to be a drop-in space kids can be, away from the influence of drugs and bullying,” Engelstad said.

Youth for Christ is an international, non-denomination organization that was founded by the Rev. Billy Graham. Locally, there was a chapter that found solid footing at The Rock in Albert Lea, However Engelstad said that from what he has been able to learn there was an earlier meeting of Youth for Christ in Austin as well.

Engelstad set a goal to establish a more permanent setting for Austin Youth for Christ, but for that to happen several churches in Austin had to come together to help make it a reality.

As the churches and their pastors began working with Engelstad, the group began to enjoy a larger following, but no permanent place to meet. Breakfast Clubs were formed at both Austin High School and Ellis Middle School before school was in session.

However, Austin Youth for Christ soon began to turn its attention to a more permanent fixture, a place where kids could meet in safety.

After some time looking, Engelstad turned to a higher power in helping determine that home.

“I was driving around the high school, praying, and I kept sensing the Lord say, ‘closer,’” he said.

That building turned out to be the professional building and soon Engelstad found himself contacting Ken Smidt, who owned the building. Engelstad had found other buildings before this, but the price tags tended to be too high.

The price for this building sat squarely in the Goldilocks zone.

“I called him just to make an appointment,” Engelstad said “He said, ‘you can have it.’”

As it turned out, Smidt had been looking for five years to sell the building; however, changes in his life made it necessary to simply get out from underneath it.

Things started happening pretty fast after that, but to make the building usable would require a lot of work.

The building was pretty well gutted, so a refurbishing would be needed. To keep up with state codes, an elevator would need to be added onto the building as well.

Earlier this year, Engelstad toured the building, which was nearing completion.

“At this point, we’re pretty much done,” he said. “Downstairs is happening pretty fast. The hard part is keeping up with the funding.”

To help with that, Austin Youth for Christ has gotten a big boost in volunteer work spearheaded by Josh Parks Construction and volunteers including Tom Flynn and Mel Koehler.

Flynn initially turned down an offer to help with drywall work, but after seeing a post on Facebook by Engelstad as to the costs of the work, he stepped up to lend a hand.

“[Flynn], he’s been there probably four out of five days during a business week either taping or mudding or doing something else,” Engelstad said.

All of this work and effort has gotten Austin Youth for Christ to this point and on April 11-12, the organization will be hosting a pair of open houses to show off the progress the center is making. The April 11 open house will be 1-2:30 p.m. and on April 12 it will be from 11:30 a.m. to 1 p.m.

Engelstad is hoping the center can be open by this coming fall.

“It feels good,” Engelstad said. “I think it will help us move forward just to meet with kids.”